Female entrepreneurship is growing across the nation, and Indiana is one of the more fertile places for women-owned businesses.

A study commissioned by American Express revealed that four out of every 10 businesses are owned by women, reflected a 58 percent growth rate during the past decade. Moreover, the study showed Indiana is among the top 10 states with high “economic vibrancy” for female-owned businesses.

Zionsville’s zWORKS co-working space has been a starting point for many female entrepreneurs, thanks to the availibility of 24-hour resources.

“Although starting a new business is incredibly hard, doing it on your own time in your own way is really valuable to women,” zWORKS Executive Director Kate Swanson said.

Drawing small businesses to Zionsville and keeping them is one of zWORKS’ goals,  Swanson. The co-working space is especially ideal for local women balancing home, career and family. Maintaining that balance can help hone skills needed for a startup.

“You have to know how to ruthlessly prioritize your life,” said Megan Glover, co-founder and CEO of 120WaterAudit. “I think that gives you a different lens.”

Glover believes there can be higher expectations for females looking for business investors.

“I definitely felt the bar was very high in terms of how buttoned-up the idea, the vision, the focus, the pitch. No room for error,” Glover said.

Glover’s fast-growing company has moved from a conference room in zWORKS in 2017 to a dedicated building with 18 employees in Zionsville.

Glover recognizes those starting new businesses need access to as many resources as possible. “It’s little things,” she said. “It’s all about that ecosystem, in addition to the tangible benefits. Every dollar matters.”

With her company growing 280 percent last year, Glover expects to achieve even loftier goals in 2019.

“We know who we are, what we do and we have the products to back it up,” Glover said.

Glover said that those seeking funding in technology, entrepreneurs in the Midwest are expected to be prepared with more detail versus those on the West Coast.

Maggie Daniels, who launched Try it Tiny in 2017, hasn’t encountered that issue with her website for tiny house rentals.

“Central Indiana has done a great job of trying to create an environment that makes it easier to start a business,” Daniels said.

The connections Daniels has made at zWORKS have helped her expand her business.

“Not just social interaction, but the types of people, the energy, being able to bounce an idea off of someone who I may not have encountered otherwise,” Daniels said.

“That was a pivotal opportunity for me,” she said. “It’s hard in the beginning to figure out how the first few dollars are spent.”

Debb Beck, CEO of Pave Medical, agrees that as a fledgling company it can be a difficult decision to determine where to spend the few dollars a startup may have.

Beck hasn’t noticed gender-bias in her role but believes that could be due to her industry being focused on product quality.

Pave Medical is renting one of the conference rooms of zWORKS while it continues product development in anticipation of a 2020 launch. The company has created a tool for extracting a larger amount of tissue in lung cancer patients, which minimizes the need for a second biopsy. The business began in 2016 when US Biopsy was sold.

“All three of us are really passionate about reducing suffering,” CEO Debb Beck said of her team.

Although zWORKS doesn’t track gender, Swanson estimates that female business ownership at the co-working space is moving toward 50 percent. She recognizes that many of the business members are at different stages, but that’s what makes zWORKS special, especially when she’s able to help a business graduate to a larger building.

“There’s nothing more rewarding than watching the progress of what you’ve been working on,” Swanson said. 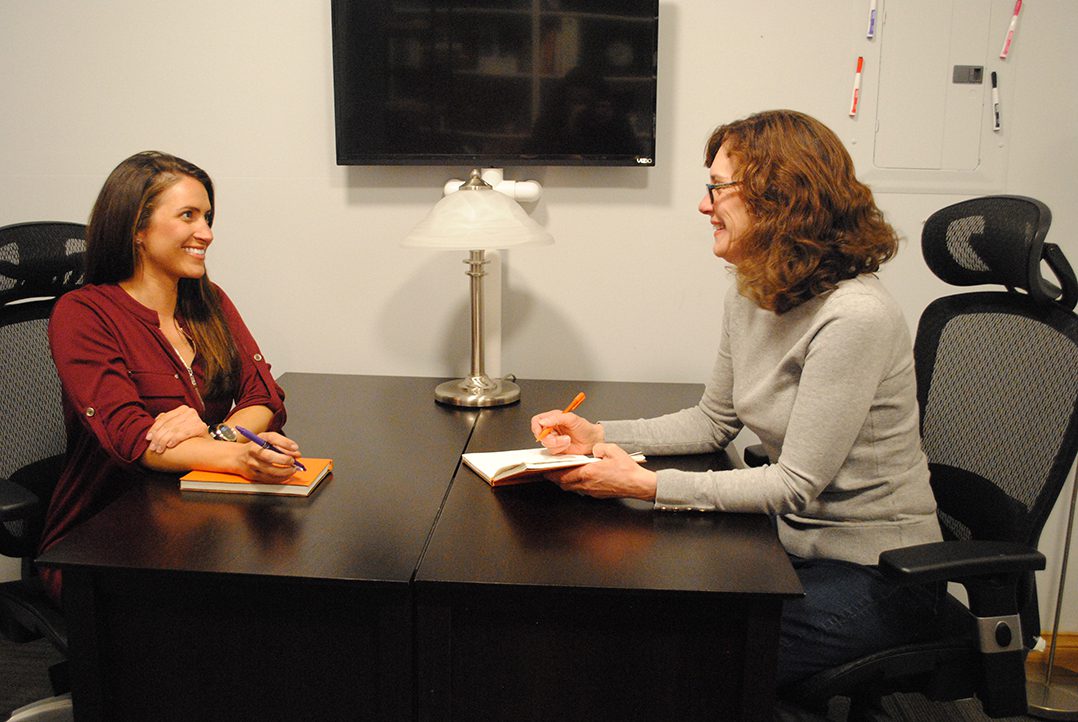 Maggie Daniels, left, and Debb Beck discuss what it’s like to be a female entrepreneur. (Photo by Anna Skinner)

Surround yourself with those who can offer advice or feedback. Megan Glover said there is a lack of experienced female mentors, but females also can utilize a growing network of women.

Find a peer group. Starting a new company can be isolating. Maggie Daniels is involved with a female entrepreneurial group and Debb Beck is part of a CEO club. “We can understand each other’s challenges, people you can trust who can maintain confidentiality,” Beck said.

Be adaptable. Glover’s company has evolved from water testing into a software company. “We didn’t set out with that vision in mind,” Glover said.

Think of decisions from all angles. “Sometimes we make a short-term decision but it hurts us in the long term,” Beck said.

Help others, and yourself, shine. Daniels noted that women may not always showcase their successes, especially when looking for investors. “It’s not the time to be humble,” Daniels said.

Confer with others for advice. “When you’re starting, you don’t know what you don’t know,” Daniels said. Leaning upon those who have experience can offer helpful perspectives, even from other industries.

Be fearless – know there will be criticism. “For every good meeting there will probably be a bad meeting,” Glover said. “What can I learn from that?”