You are at:Home»Current in Carmel»Carmel Community»Sam Costa races celebrate 50 years

Much to his amazement, Terry Townsend has been the race director for the Sam Costa half and quarter marathons for 31 years.

“When I started doing this in the ‘80s, I never gave a thought that I would be doing it on the 50th anniversary,” Townsend said.

One reason for his continued involvement is the backstory of how the race, which was originally named the Central Indiana Striders Half-Marathon started by Carl Carey.

Sam Costa, a Chicago police detective, would come to Indianapolis to compete and got to know some runners from Carmel.

“There were so few races around he would make that 200-mile, one-way drive to come down here,” Townsend said.

A middle-of-the pack runner, Costa ran the race in 1972 and then ran the Boston Marathon a few weeks later. He died later that year.

“(The fact) these guys named the race after him showed the respect they had for him,” Townsend said.

The 50th annual Sam Costa Half and Quarter Marathon, presented by Indy Runners and Walkers, are set for 9 a.m. March 23, beginning at Northview Church in Carmel. 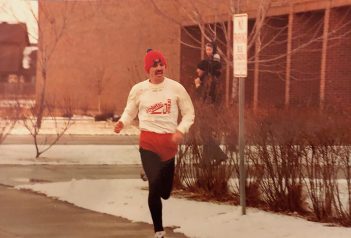 Chuck Koeppen nears the finish line on his way to winning a Sam Costa race in the 1970s. (Submitted photo)

Koeppen turned the race over to Indy Runners.

“It’s the oldest race in the state, and it’s one of the best, if not the best run with what Terry has done,” Koeppen said.

The race was held at Clay Middle School from 1973 to 2004 before moving to Cherry Tree Elementary for one year. It has been at Northview Church since then.

Westfield resident Lucie Sulewski has won the half marathon six times, including last year’s race. No other woman has won more than three times.

“One of the most special things of the race is the history,” said Sulewski, who plans to run again this year. “It’s incredible a race can continue for that many years. Terry Townsend is one of a kind and does an outstanding job directing the race. This is key and much appreciated by participants.”

Koeppen, 73, who still lives in Carmel, and Mike Smith each won the race four times.

“I would run a road race a week or at least every two weeks in my 20s and early 30s,” Koeppen said.

‘Each time that I’ve run the Sam Costa, I have very special memories of the event,” Burleson said.  “The first time in 1975 was special, because it was the first time that I had ever run a half marathon, so as a neophyte, it was a thrill to win. Following up in 1976 with a win served as a validation that it wasn’t a fluke that I had won the previous year.  Obviously, setting a solid course record in 1983 was special in that I was using it as a tune-up for the 1983 Boston Marathon, and my performance would again be an indicator of my fitness level.”

The 1983 race was unusually hot with temperatures in the high 70s.

“Distance runners know that your engine performs best when temperatures are in the mid-40’s to 50’s, so winning with a course record was indeed a pleasant surprise,” Burleson said.