You are at:Home»Current in Noblesville»Noblesville Community»Council talks money, downtown improvements

What it means: Wiles said the project is moving along and that committee members and the city’s economic development department are working to create a master mailing list for business owners who might be affected by the project. Wiles also said the committee is still working on beginning to use and also get new planters for downtown sidewalks and streets. Crews will soon begin putting flowers in the planters, but new planters also are expected by summer. Wiles also gave an update on the revamping of the Seminary Park project, mentioning that the committee received only one bid during the March 15 bidding process. The bid was approximately $200,000 more than the $300,000 budget to complete the project. The contract was not awarded, and Wiles said the parks department is looking at ways to cut back. 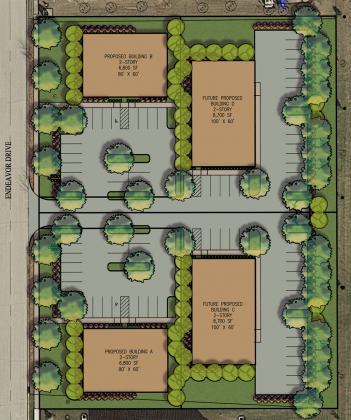 The lot being changed in the Cumberland Pointe planned development is at 15270 Endeavor Dr., east of Cumberland Road, between Greenfield Avenue and 146th Street. (Submitted image)

What happened: The council approved (6-0) an ordinance amending an ordinance for the Cumberland Pointe planned development at 15270 Endeavor Dr.

What it means: Approval paves the way for Bedrock Builders to use one of the lots on the property for its headquarters, further dividing the single lot into four lots. Cumberland Pointe, adopted in 2002, is a mixed-used development with housing, industrial and commercial uses. The change will add four buildings to the property in addition to parking space.

What happened: The council held a public hearing an approved (6-0) an ordinance for additional appropriations from the parking meter fund for parking enforcement initiatives.

What it means: “The underlying issue here is that the police department is looking for a new vehicle and new equipment for parking enforcement,” said Jeff Spalding, the city’s financial controller. “This is appropriating funds from the parking meter fund to do so, a total amount of about $55,000.” No one spoke during the public hearing.

What happened: The council held a public hearing approved (6-0) an ordinance for additional appropriations from the general fund for façade improvement grants.

What it means: “This is the funding piece of another agenda item you have this evening around changing a little bit of the structure and design of the façade improvement grant program,” Spalding said.

The façade improvement grants will now be funded by the city’s general fund rather than the Downtown Tax Increment Financing District. No one spoke during the public hearing.

Read more about this in this week’s cover story.

What happened: The council discussed an ordinance to repeal and replace all prior ordinances relating the city’s façade grant program.

What it means: “Tonight we are presenting an ordinance that would rescind the current ordinance for façade improvement grants and replace it with some new guidelines,” said Aaron Head, economic development specialist with the City of Noblesville.

The ordinance, if approved, will change the boundaries of the program to be citywide and also changes the application process.

Read more about this in this week’s cover story.

What happened: The council discussed ordinances for additional appropriations to re-establish the motor vehicle highway fund and the parks and recreation fund to the 2019 adopted budget levels.

What it means: Spalding said ordinances re-establishing both funds is a result of the Dept. of Local Government Finance, the city’s budgeting oversight body, determining funds for the 2019 budget before the end of the 2018 calendar year, before finances were at the level the city estimated.

“When they do their analysis of (budgets) local units of government submit, they have their own methodology that is overly cautious about making budget recommendations that is not based on the actual known facts of the fund balances that cities will have by year end,” said Spalding, referencing the budgeting process that occurs in October each year. “As a consequence, when they went through our proposed 2019 budget, they made a reduction of the MVH fund of about $210,000 and a reduction in the parks fund of about $101,000.”

Spalding said when the monies balance out by the end of the year, he is able to send evidence of it to the DLGF and then go through the process of re-establishing the funds to the original budgeted amount.

“What these actions will do will accomplish that goal with no fiscal impact,” Spalding said.

Because it was a first reading of the ordinances, the council took no action but will conduct public hearings and vote on both at its April 9 meeting.