“It’s broken a bunch of records for video-game production, and we thought we (could) draw upon the popularity and what is being shown in popular culture,” Grove said. “Maybe that will draw a little bit of a younger crowd to the Carmel Clay Historical Society.” 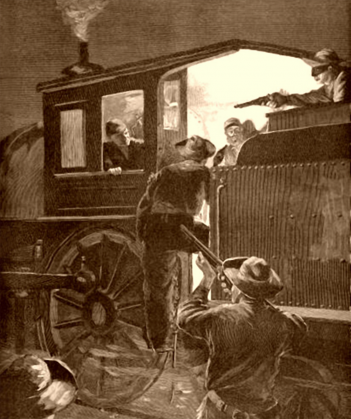 “The Wild, Wild Midwest: Indiana Train Heists of the 1800s” exhibit will open to the general public 1 to 4 p.m. April 13 at the Carmel Clay Historical Society. CCHS members can preview the exhibit April 12 from 5 to 7 p.m.

Grove said the exhibit features several different stories of heists, not just the ones along Monon Railway but other railways in Indiana.

“Indiana was the home to the first train heist in U.S. history in 1867,” Grove said. “This was led by the Reno Gang, a group of brothers from Seymour.”

Another train heist, the Monon Train Robbery of 1885, occurred near North Bend, Ohio.

“We’ll be looking at those and other famous outlaw activity that happened here,” Grove said.

The exhibit will be open until mid-June. CCHS received a Heritage Support Grant for $3,300 for the exhibit from the Indiana Historical Society.

Historian Justin Clark will talk about the Reno Gang at 2 p.m. May 5 at the Carmel Clay Public Library. Grove said films will be shown at yet-to-be-determined times.

Elvis Presley portrayed one of the Reno brothers,Clint, in his first film, “Love Me Tender.” The movie is loosely based on the Reno Gang.