You are at:Home»Current in Zionsville»Zionsville Community»Zionsville West Middle School Chess Team best in the state

The Zionsville West Middle School chess team won the Scholastic Chess of Indiana state championship for grades eight and below.

The competition was March 23 in Muncie. 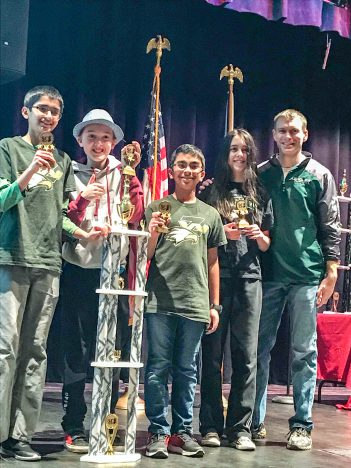 “As much fun as I have coaching the kids, it’s really a matter of their investment and seeing if they’re interested,” coach and team leader Michael Johnson said. “Middle school is a time when they have the intellectual ability to really progress in the game.”

Four years ago, Johnson led the elementary students to a state chess title when many of them were third-graders.

Johnson said the skills students learn through chess transfer to life, such as time management and resilience.

Rambhia and Allie were part of the Eagle chess club in kindergarten. Konnur joined the team in fourth grade.

Klopper was part of the chess club at Stonegate and joined the team in middle school.

ZWMS was undefeated this season.

“Every game you lose, or almost lose, you usually learn something,” Allie said.

“There are billions of possibilities for how a game could possibly go,” Konnur said.

ZWMS competed against 28 other teams from across the state, including another team from Zionsville West which took fifth place. Members of that team are Maaran Ravi, Campbell Carlson, Akkash Rathnasabapathy, Rafa Reynal and Max Kitchell.