You are at:Home»Current in Zionsville»Zionsville Community»A one-arm game and no handicap: Zionsville man doesn’t let immobility keep him from playing golf

Mick Miller is a self-taught scratch golfer. He plays in a senior league and two other leagues and sometimes plays 27 holes a day.

And he plays with one arm. 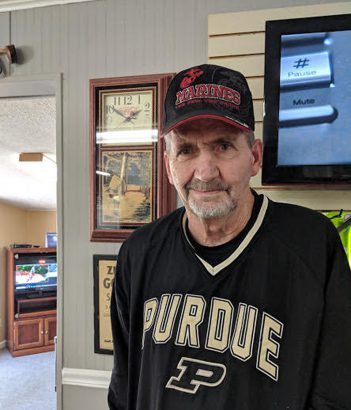 A stroke 15 years ago rendered Miller’s left arm immobile. A doctor said he needed exercise and suggested activities that require walking, such as golf.  He took up the game and, to his surprise, truly enjoyed it.

Miller said he can’t hit a drive as far as a lot of players. But George Emerich, who works part-time with Miller at the Zionsville Golf Course, said he’s good at all aspects.

“Golf was not meant to be played with one arm,” Emerich said.

After moving to Brownsburg from Wabash 13 years ago, Miller found himself near the Zionsville Golf Course and decided to stop in.

“I came hobbling up to the door,” he said.

The golf course superintendent at the time, Orlin Coleman, brought him a cart, and they struck up a conversation. Coleman eventually offered Miller a part-time job, and Miller has been with the golf course ever since.“(Coleman’s) why I’m here,” Miller said.

Miller helps customers in the clubhouse but prefers being outside tending the greens. A Vietnam veteran and Purple Heart recipient, he relishes the quiet time outdoors but also appreciates the others who work on the course.

“I’ve made a lot of good friendships here over the years,” Miller said.

“He’s a good friend,” Emerich said of Miller. “He’ll do anything for you.”

Miller is at the course almost daily, either playing golf or working.

“I look forward to being here,” Miller said. “But I’d rather play golf.”