“I love Agatha Christie and have grown up watching her expertly crafted work,” Jackson said. “I am thrilled to be a part of another one of her shows. She is truly the queen of crime and always keeps you guessing what will happen next and ‘who-done-it.’”

The Carmel resident plays Laura Warwick, the kind wife of Richard Warwick, the murder victim in the Christie play “The Unexpected Guest,” April 18 to 28 at the Epilogue Players, 1849 N. Alabama St., Indianapolis. 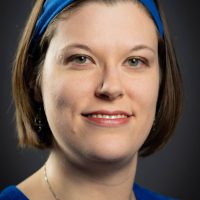 “She is an interesting character to play,” Jackson said. “She has a caring heart but will stand up for herself and for others when she’s pushed too far. It’s been a challenge to show the different layers to her in the scenes. This is the first time I have worked with Catherine Mobley, the director, and she has been great to work with. She really lets the actors try things out and get comfortable on stage but also helps you shape and refine your character in a positive way. In fact, everyone involved with the show has been wonderful to work with.”

Jackson, a 2005 Hamilton Southeastern High School graduate, has been a theater fan most of her life and was involved in every show she could be at HSE.

“I was either on stage or backstage for 11 shows in my high school career,” she said. “It was a blast.”

Jackson was part of the ensemble in Civic Theatre’s “Sense and Sensibility” in February 2018.

Jackson is the site facilities administrator for the facilities department at Carmel-based Allied Solutions.

There are eight performances. For tickets, visit epilogueplayers.com/reservations.html.