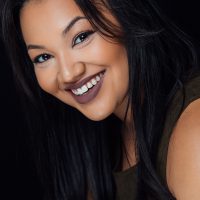 Milan plays Rheba in the Indiana Repertory Theatre’s production of Moss Hart and George S. Kaufman’s madcap comedy “You Can’t Take It with You,” April 23 to May 19.

“I find that Rheba has a true passion for music, just like I do,” Milan said. “Throughout the production, Rheba is constantly singing and skating throughout the house. It gives her joy in the hardest moments of the show as well as the happiest moments. I feel that I also share this love for music. No matter what mood or state of mind I’m in, I always turn to music.”

Milan, an Indianapolis resident, was previously in IRT’s Elephant & Piggie’s “We Are in a Play,” which ended March 31.

“It was a little tough transitioning from one show to the next, but thank goodness for the one day off we got in between the two shows,” Milan said. “It gave me the opportunity to re-center myself, get some rest and prep for the next show.”

Hart and Kaufman’s Pulitzer Prize-winning farce debuted on Broadway in 1936. The story centers on Alice, played by Janyce Caraballo, who loves her eccentric family but isn’t sure her fiance’s straight-laced parents will feel the same way.

“I feel like this play ages well because a lot of the show’s topics are still just as relevant to topics and challenges we face in today’s time,” said Milan, who grew up in Georgia and attended Indiana University to study musical theater.