You are at:Home»Night & Day»Entertainment News»Asner stars as Holocaust survivor in ‘The Soap Myth’ at Palladium

Ed Asner will always be identified with his role as Lou Grant.

Asner earned five Emmy Awards during his 12-year run portraying  the gruff but soft-hearted newsman in “The Mary Tyler Moore Show” for seven years and “Lou Grant” and five years.
At 89, he is playing a memorable fictional character as Holocaust survivor Milton Saltzman in Jeff Cohen’s “The Soap Myth.” The Jewish Federation of Greater Indianapolis is sponsoring the dramatic reading of the play at 7:30 p.m. April 30 at the Palladium for the Center for the Performing Arts in Carmel.

“I think it’s a very important role to play a survivor of the death camps, who is on a mission on informing the world about what he has witnessed, and the world doesn’t want to take the time to listen,” Asner said. 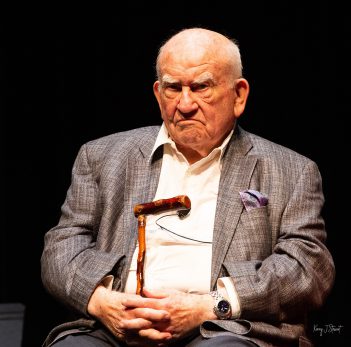 Ed Asner as Milton Saltzman in “The Soap Myth” will be held at the Palladium April 30. (Photo by Kerry Stewart)

Saltzman is a witness to the Nazis’ atrocities, including their experimenting in using concentration camp corpses to make soap. A Holocaust denier tries to dispute that, and an investigative reporter tries to find the truth.

“Age-wise, I certainly can identify with the role and I’m familiar with the horrors of the Holocaust and I feel that no matter how hard you try to instill in people the knowledge of the Holocaust, that it will eventually fade into non-existence,” Asner said. “People will forget the lessons learned from the Holocaust. They will forget the succeeding holocausts (genocides) as they forgot the original one. And It will take place again, again and again.”

Asner said it’s important people know when it happens and why it happens.

“It’s presented most charmingly by Tovah Feldshuh. She does a great job presenting the anti-Semite cloaked in decency,” Asner said. “I can’t commend her or her talent enough.”

Dee Pelletier will perform in Feldshuh’s role in the Carmel performance.

Asner said he had no idea when he did the first reading in May 2016 at the Lincoln Center in New York that he would still be performing it three years later.

“It was a beautiful play, a beautiful presentation,” he said. “I didn’t know that Jeff would be able to mount a tour such as we are doing on the East Coast, primarily. The fact that audiences are all spellbound by what we do, even though it’s a reading, I’m quite happy to achieve these results.”

Cohen said he chose Asner because he is his favorite actor. When Asner did the first reading, Cohen said he “was brilliant, as I knew he would be.”

Asner is OK with people mostly identifying him with his Lou Grant role.

“It never bothered me,” Asner said. “I prized the identification of Lou Grant, an ordinary man who instilled trust in everyone who witnessed him. Twelve years in the role, seven comedically and five dramatically. I like the results.”

Asner is still touring in a one-man show, “A Man and His Prostate.”

“It’s a wonderfully educational seminar with lots of laughs. Nothing can be finer,” he said. “I felt I owed it to ‘The Soap Myth’ to put a hold on my other activities and spread the word wherever can.”