“Our productions feature veteran actors and crew members,” said Mathias, a Theatre Arts/English teacher at HSE. “When trying to explain the difference between Drama Club and Thespian Society, I often refer to thespians as ‘varsity drama,’ in that they operate on a condensed production schedule, performing on a higher level due to their past experiences and seasoned skills.” 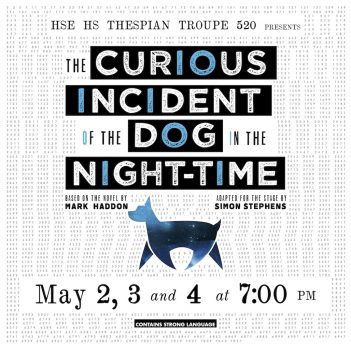 Promotional poster for Hamilton Southeastern High School Thespian Troupe 520’s presentation of “The Curious Incident of the Dog in the Night-Time. (Submitted photo).

Thespian Troupe 520, HSE’s branch of the International Thespian Society, will put its collective skills on display with next month’s presentation of “The Curious Incident of the Dog in the Night-Time” in the school’s Little Theatre. Performances are May 2, 3 and 4 at 7 p.m.

One of three plays presented each school year, “The Curious Incident of the Dog in the Night-Time” concludes HSE’s theater season.

Based on a 2003 mystery novel by British writer Mark Haddon, the stage adaptation by English playwright Simon Stephens tells the story of Christopher John Frances Boone, a 15-year-old on the autism spectrum who sets out to solve the mystery of who killed his neighbor’s dog. During an adventure-filled journey, he learns life lessons and develops a new outlook about his future.

“His quest to uncover the truth forces him to grapple with the issues of family, school and his relationships with the world around him,” said Mathias, who is one of four co-directors of a 14-member cast.

The other directors are Mary Armstrong, Devan Mathias (Ethan’s wife) and Emma Leary. Armstrong is an HSE teacher. Devan Mathias is a professional Indianapolis-area actor. Leary is a student-teacher from Ball State University assisting in Ethan Mathias’ class.

Winner of several theater awards when it debuted in 2013, “The Curious Incident of the Dog in the Night-Time” was chosen for Thespian Troupe 520’s year-ending performance for a host of reasons.

“It tells an important story about what people are capable of,” Ethan Mathias said. “Particularly for our thespian show, we try to pick shows that will challenge our actors and help all our students grow as well as tell a good story.”

HSE senior Tadd Nyland, who plays Christopher, is passionate about the story.

“I love playing this role so much because Christopher has so many aspects to him, and it’s been a pleasure studying who Christopher is and digging deep into what he believes so the audience can see all those aspects of this phenomenal kid,” said Nyland, who, like many of his castmates, had to do a little extra preparation for their parts.

“Everyone in this show has a British dialect, so that was a challenge, getting my brain tuned into hearing and talking in a dialect,” Nyland said. “Another challenge is that Christopher does have autism, so although I have been around kids who suffer from this, I had to do a lot of research about autism so I can make sure I’m doing the character justice.”

Other members of the lead cast are are senior Lauren Reising, who plays Siobhan; junior Demrie Hasey, who plays Ed; and senior Ava Gerber, who plays Judy.

For more or for tickets, visit HSEDrama.org. Mathias cautions that the play contains language that might not be appropriate for young children.