You are at:Home»Current in Noblesville»Noblesville Community»Council looks at development changes for Crossroads

The Noblesville Common Council met May 14 for a regular meeting at City Hall. Councilor Megan Wiles was absent. The next meeting will be at 7 p.m. May 28 in the council chambers (second floor) at City Hall, 16 S. 10th St. To see an agenda, visit cityofnoblesville.org.

What it means: Ditslear recognized Brian Gray for 25 years of service to the City of Noblesville. Gray is the assistant city engineer.

What happened: Councilor Darren Peterson gave a report from the Downtown District Committee.

What it means: Peterson said alley activation downtown is continuing and staff from the economic development department are continuing to work with owners of buildings adjacent to downtown alleys to keep the project moving forward.

In addition, Peterson said installation of new sidewalk planters has been pushed to the fall because more bids are being considered.

Peterson said the committee is continuing to work with the Indiana Dept. of Transportation, Duke Energy and Hamilton County to get all of the fixtures downtown to match.

Peterson also announced the committee’s work to install a hydration station for pedestrians and their pets in the south alley off the downtown square.

“That is getting closer, but we’re waiting on the construction further to the south to be sure we get it in the right spot,” Peterson said.

What happened: Councilor Mark Boice gave a report from the Roads Committee.

What it means: Boice first mentioned the results of an intersection analysis done at Carrigan Road and North Harbour and Oak Bay drives.

“There have been lots of complaints, but (the analysis shows) that there are no concerns there. There have only been two crashes in five years, and neither were bad,” Boice said. “A roundabout would be $1.5 million, so we’re looking at that and working with the state. We’re not saying we’re not going to do anything, but it is a lot safer than any of us knew, but it would be bad if something did happen there, so we’re keeping an eye on it.”

“We did our testing and decided that it was not going to last,” Boice said.

What happened: The council introduced an ordinance that would amend an existing ordinance regarding the city’s pledge of local income tax money to the Noblesville Redevelopment Commission for the payment of lease rentals.

What it means: The amendment to the language in the original ordinance is a result of new guidelines being implemented by the Standard & Poor’s credit rating agency.

“Basically, what’s going on here is there is language that the council adopts that defines the circumstances within which we’ll issue debt,” Noblesville Financial Controller Jeff Spalding said. “The credit community cares about that language, and what that language is trying to assure the credit rating agencies (of) is that we won’t issue debt and put ourselves at any type of financial risk. There was a small, relatively nuanced aspect of the language we had historically been using around the issue of income tax back debt that the credit rating agency identified this item and basically said, ‘We’re concerned if you don’t change that language. We might have to give you a lower credit rating because we think it presents an adverse risk to the ability of bond holders to get paid back.’”

The council will vote on the ordinance at its next meeting. 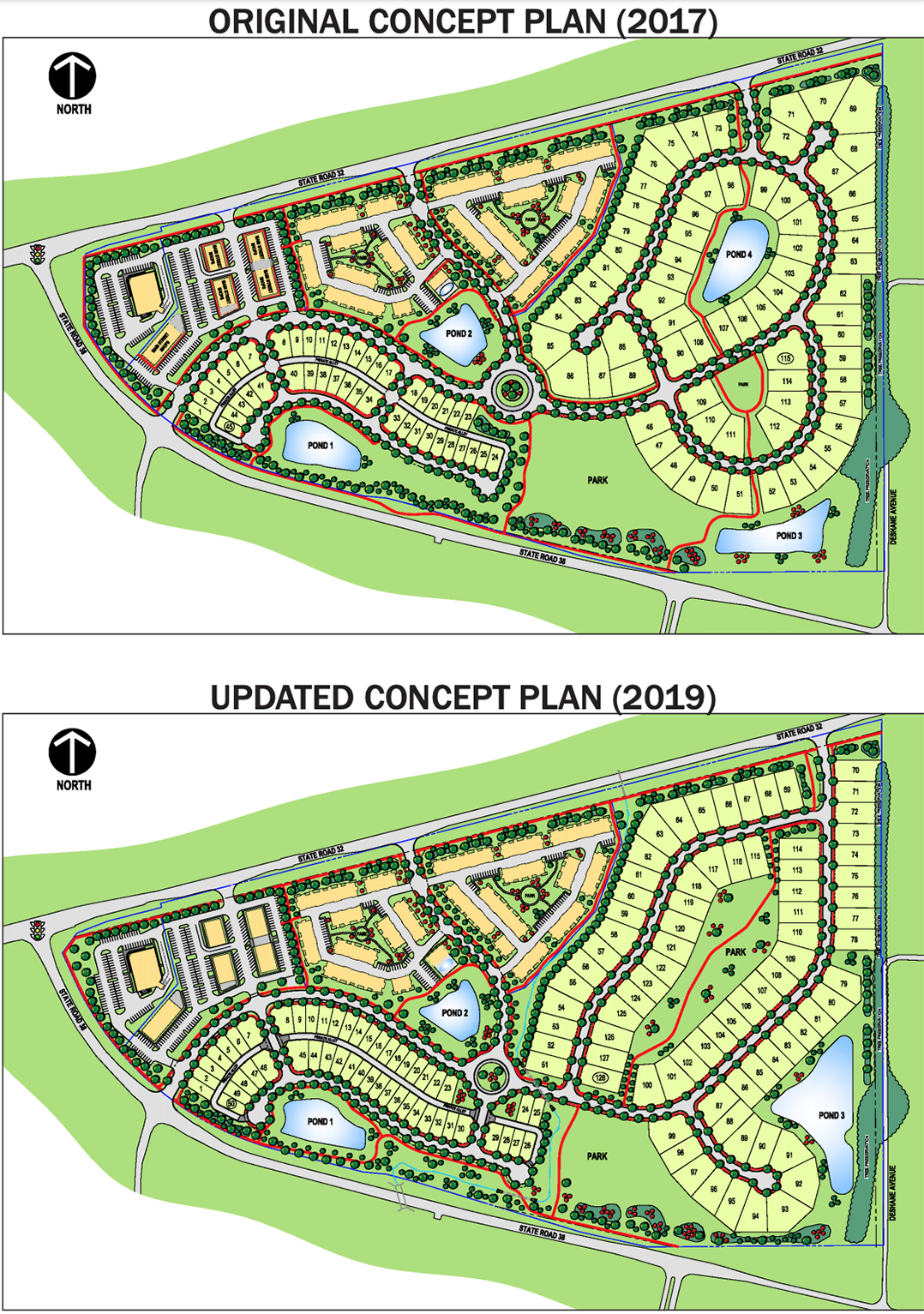 These layouts – the approved plan from 2017 and the proposed new plan – show changes that could be coming to the Crossroads housing and commercial development east of Ind. 37. (Submitted images)

What happened: An amendment to the Crossroads development was introduced.

What it means: In 2017, the council approved a development plan for Crossroads, a housing and commercial project at the eastern split of Ind. 32 and 38, just east of Union Chapel Road. Corby Thompson, manager of Boomerang Development, LLC, is developing the project. The amendment is proposes that the number of retention ponds be reduced from four to three, allowing for an additional park for residents; relocating the roundabout in the project to avoid costs associated with rerouting stormwater piping; and adding 13 lots and changing the original 75-foot lots to 70-foot lots.

“When Corby and his engineering team then went to do final design and engineering – maybe you have read how costs continue to go up and up in the development world, just like in a lot of things – they ran into a lot of increased costs that they didn’t anticipate,” said Steve Hardin of Faegre Baker Daniels law firm, representing Thompson and Boomerang Development. “So, they went back and met with city engineering and city planning and talked about how they could make the project more efficient and a win-win for the city. A lot of times, from a city perspective, it’s a benefit to have less streets, curbs, sidewalks, sewer, water, drainage. Those are things that eventually have to be maintained over the years, so we are (trying) to be more efficient with the layout.”

The council did not take action on the ordinance. It will now go to the Noblesville Plan Commission, which will send a favorable or unfavorable recommendation back to the common council at a future meeting.

What happened: The council approved a resolution making appropriation transfers in the general fund.

What it means: Noblesville Financial Controller Jeff Spalding explained the need for the transfer.

“We’ve been making a number of changes to the chart of accounts, and departments are still getting used to that. In the budget process for 2019, there were still a couple of circumstances in the fire department and engineering department where they built their budget under the old chart of accounts, even though we were operating under the new chart of accounts,” Spalding said. “We’ve since sorted that out, and they’ve identified amounts that need to be moved from one major series to another. All this is doing is moving those funds accordingly, based on their follow-up analysis. There is no impact on their budgets and doesn’t change their budgets. It just gets the appropriations into the right categories.”

The council approved the resolution, 8-0.

What happened: The council approved a resolution making an appropriation transfer in the parks and recreation fund.

What it means: Noblesville Financial Controller Jeff Spalding explained the need for the transfer.

“This is addressing an issue that was discussed during the budget process but not really enacted as part of the budget,” Spalding said. “It’s the notion of the city funding for the golf operations. The golf operations currently don’t generate enough direct revenue to cover their operating costs, and we’ve come to the conclusion that the parks department operating budget should be reflecting the fact that they’re anticipating a golf subsidy. So, what this transfer does is it takes the money from the parks fund contingency and puts it into the parks department budget, and it stays there, prepared to make the subsidy to the golf budget once we get closer to the end of the year and they know the amount. In this way, the full cost of operating the golf operation in the city is reflected in the parks department budget. That’s the rationale behind this.”

The council approved the resolution, 8-0.