You are at:Home»Night & Day»Artist Profile»Creekside Middle School student keeps expanding acting career
Yuvi Hecht has been interested in acting ever since he can remember.
“I was watching movies and I said I want to be up there (on screen),” Hecht said. “It sparked what I want to be when I’m older.”
Hecht, who will be in seventh grade at Creekside Middle School in the fall, has acted in several short films and commercials in the past 1 1/2 years. He was born in Hong Kong and lived there for seven years before his family moved to Austria for three years. The family moved to Carmel in December 2017. 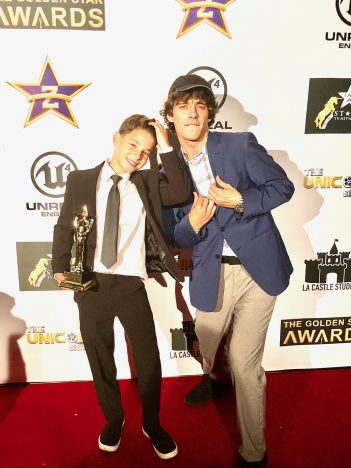 Hecht’s short film “The Unicorn Sisters,” a drama from Starz TV Network, has won awards at several film festivals and is Oscar-eligible.

“My role was the coolest kid in school,” he said. “We were in Hollywood for 10 days (in June 2018). We started working memorizing lines for four days. The filming took three days in L.A. Castle Studios. We had a premiere of the movie with red carpet, the whole nine yards.”
The 10 days in Hollywood included a workshop. His sister, Tamar, 9, also had a small part in “The Unicorn Sisters.” The film included two professional actors and an actress.
“It was a nice dive into the industry.” his mother Hadas Hecht said.
Hecht completed filming of the short film “The Imp ” this spring.
“Most of the films have been horror, dark, dying or getting shot,” Hecht said.
Hecht has acted in a comedy film, “The Boy on the Bench,” which was filmed in Indianapolis.
Hecht has been managed by Carmel-based Wallflower Pictures for the past several months.
“They’re helping develop my acting career,” he said.
Hecht also has done some modeling and trained at John Casablancas Modeling and Career Center. When he was younger in Hong Kong, he was featured in Hugo Boss advertisements.
“I got into runway modeling and had a few photo shoots,” he said. “So, I’m just started with modeling, but I’m mostly focused on acting.”
Hecht was more into sports when he was younger. His parents are from Israel. Hecht speaks Hebrew, German and English.
“He was training in the Brazilian martial arts, capoeira,” Hadas said. “Here in the United States, it’s easier to follow your dream as an actor because there are so many more opportunities. We got into this adventure with Starz TV network. That’s when he realized this is what he wanted to do. He was playing soccer before for the Indiana Fire. I told him he had to make a choice. That’s when he realized this is what he wants to do.”
Hecht gave up soccer in the summer of 2018. His acting so impressed Wallflower Pictures that it added a part for him.
“I auditioned for a part where I was a 14- or 15-year-old,” Hecht said. “I was really emotional, and they came back in and loved it. I was too young for the role, but they created a new role for me.”
The short film is designed awareness for anti-bullying and suicide prevention.
“It was a classroom of 14- and 15-year-olds, so we added a family for one of the students,” Wallflowers Pictures President Trey Brown said.
Hecht will play that student’s younger brother.
Hadas was happy to turn over managing his career so she could concentrate on finishing her doctorate in clinical psychology. Her husband, Ohad, is CEO of a software company in Indianapolis.
Previously, Hecht’s mother was able to manage his YouTube and social media accounts.
For more, visit yuvihecht.com.