Charlie Steiner is embracing many things about playing the Beast.

One of them is getting to play a darker character in Christian Youth Theater’s production of “Beauty and the Beast,” which is set for June 7 to 9 at the Marian University Theatre. 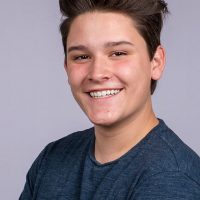 “I typically play more light-hearted characters, so this has been a fun learning experience,” Steiner said. “Our director (Ty Stover) and the rest of the directing team has made this experience one that I will never forget.”

Steiner, who will be a sophomore at Zionsville Community High School in the fall, loves the songs his character sings.

“The songs that he sings have so much depth and emotion within them,” Steiner said. ‘When I was learning the songs with our amazing vocal director (Jaimie Riechman), she really helped me understand how to convey the complex themes of the songs. I have also loved playing opposite of our amazing Belle, Jaala Berry.”

Steiner, 15, said he has faced a few challenges playing the role.

“It has been a challenge to switch from playing comedic/ happy characters to a character that has so much depth and darker emotions,” he said. “It was also a challenge to figure out exactly how I wanted to play the Beast, and show his evolution throughout the show.”

Steiner has been in several other CYT shows, including “Footloose” “The Sound of Music,” “Tarzan” and “High School Musical,” among others.

“When CYT announced that they were going to do ‘Beauty and The Beast,’ I was very excited because I really love the music of the show, and I really wanted to be the Beast,” Steiner said. “’Beauty and the Beast’ is one of my favorite Disney movies, so it has been a dream come true to be able to play this character.”

“Beauty and the Beast” is the final production of CYT’s 10th anniversary season. CYT has added a fifth week to its theater day camp offerings. Camps start June 17. For more, visit cytindy.org.