Fishers resident Jerry Gibbs got into beekeeping when searching for a hobby he could do with his stepdaughter in 2017.

Gibbs first approached his HOA at Covington Estates, which prohibited in the neighborhood. So he utilized the land behind his house, which belonged to Jon Hunt, a longtime beekeeper who sold Gibbs his first two hives.

When Gibbs first approached Hunt, however, he was unaware Hunt was a beekeeper. 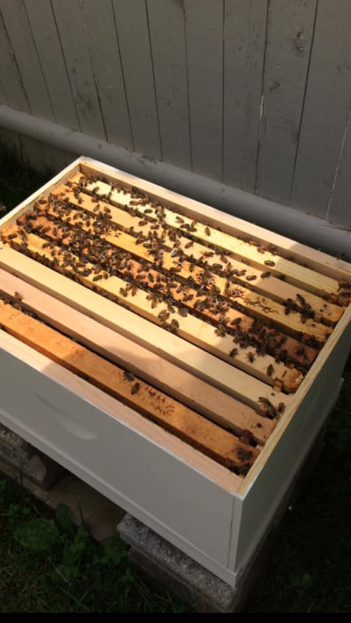 Gibbs, however, still ran into issues with his HOA, even though the hives weren’t housed in Covington Estates. The problems began when he harvested honey and brought it to his neighbor. His neighbor complained that Gibbs’ honey bees were stinging his guests around his pool, but Gibbs disputed the claim and said he found several yellow jacket nests near the pool.

City of Fishers Director of Planning and Zoning Tony Bagato said because the city didn’t have a beekeeping ordinance, the assumption was the activity was not permitted.

“Our ordinance in the past did not address it at all,” Bagato said. “When we got a complaint about the bees and beekeeping being done, our approach was without an ordinance on the books, we considered it a prohibited use, since right now our code didn’t address it.”

Hunt had to prove he had been a beekeeper since before his property, which was originally in Noblesville, was annexed into Fishers. The City of Noblesville doesn’t prohibit honeybees. After Hunt’s property was approved for maintaining hives, Gibbs took the issue statewide. He addressed the Beekeepers of Indiana in January, and the organization eventually formed a committee and addressed local representatives about writing a bill.

State Sen. Richard Grooms authored Senate Bill 529 with Sens. Michael Crider and Chris Garten, which provides that “any county, city, town or township may not adopt or continue in effect any ordinance, rule, regulation or resolution prohibiting the establishment or maintenance of beekeeping on property that the person owns, rents or leases. Specifies that a county, city, town or township may adopt an ordinance, rule, regulation or resolution that regulates certain aspects of beekeeping.”

Although HOAs may still have the ability to prohibit beekeeping in specific neighborhoods, cities can’t. Bagato said new standards for beekeeping in Fishers will be established, but he’s not sure exactly how hives will be regulated. He suggests anyone interested in beekeeping wait until the standards are established, which could involve limitations to the number of hivers per lot size.

“This is just a fun hobby I thought of we can do,” Gibbs said. “Being a beekeeper, it’s just amazing.”

In addition to the five hives Fishers resident Jerry Gibbs tends on Jon Hunt’s property, he also tends two beehives at his church, Venture Christian Church, in Carmel. The church also has a garden in the property, and the crops benefit the Bread of Life Food Pantry.

The hives on the church’s property will allow for the honeybees to pollinate the garden, and Gibbs also is donating honey to the food pantry.

Share. Twitter Facebook Pinterest LinkedIn Tumblr Email
Previous ArticleLocal boy donates $300 worth of food and a $50 gift card to the Delaware Township
Next Article Knee-high by the Fourth of July?: Local farmers having difficulty planting crops due to wet weather