You are at:Home»Current in Fishers»Fishers Community»Local boy donates $300 worth of food and a $50 gift card to the Delaware Township

A local Fishers kindergarten student donated $300 worth of food to his local food pantry. 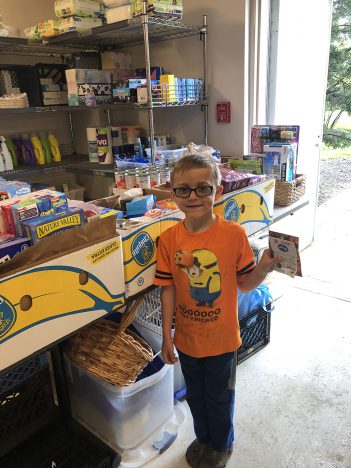 Jayse Himmelberger, 6, was introduced to food banks during his school’s service learning project. His class at Harrison Park Elementary went on a field trip to the Delaware Township food pantry in January. Afterward, Jamie Himmelberger, Jayse’s father, said Jayse was cleaning his room when he made a declaration to his parents.

“He was cleaning up his room and he came to my wife and I and said he didn’t want his toys anymore,” Jamie said.

Jayse told his parents he wanted to sell his toys and give the money to people who couldn’t afford food, so Jamie sold the toys on Facebook’s Marketplace with attached notes explaining the cause.

Jayse’s parents and grandmother both to match whatever funds Jayse raised. He sold $100 in toys and raised a total of $300 to purchase food.

Jayse chose food he likes, on the assumption kids his age would like them, too, such as macaroni and cheese, peanut butter, jelly, fruit snacks, canned fruit and cereal bars. The store manager also gave Jayse a $50 gift card to give to the food pantry.

Jamie said Jayse picked all of the food out on his own.

“I wanted to buy the food (instead of simply giving the money to the food pantry) so he could see what $300 worth of food looked like,” Jamie said.

Jayse donated the food and Kroger gift card to the food pantry May 19.

“We were very proud. We were thinking how much of an impact his teacher made. He was in kindergarten,” Jamie said. “Neither of us could imagine doing this at 6 years old ourselves.”