You are at:Home»Current in Westfield»Westfield Cover Stories»Shoot for the moon: Rotary to recognize 50th anniversary of Apollo 11 moon landing

Fifty years ago, Apollo 11 astronauts Michael Collins, Buzz Aldrin and Neil Armstrong were the first men to land on the moon. Back home on Earth, Westfield Rotarian Dave Mueller, then 16 years old, was at Boy Scout camp and did not see the landmark televised event.

“I remember not having access to a television, but I did stand outside in the dark and look up at the moon,” Mueller said. “I wanted to see a light or twinkle from the landing craft. I didn’t see it, but I remember imagining the astronauts walking on the moon.” 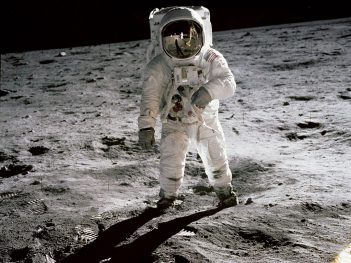 Westfield Rotarian John Salladay was 24 years at the time and vacationing with his wife and her family in Myrtle Beach, S.C.

“What I remember is huddling around a little black-and-white TV in a motel room, and everybody cheering and yelling and standing there in disbelief that the Americans were walking around on the moon,” Salladay said.

The Rotary Club of Westfield will commemorate the 50th anniversary of the July 20, 1969  Apollo 11 moon landing with a presentation by Greg McCauley, a Westfield resident and Link Observatory Space Science Institute executive director and CEO. The presentation will be 7:30 a.m. June 25 at the Bridgewater Club, 3535 E. 161st St.

Admission to the 60-minute presentation is 60 is $5. A light breakfast will be served.

“I think what made it so inspiring and wondrous was that it was so dangerous,” McCauley said. “They were just rolling the dice. Every major part of this mission, there were half a dozen times there was no backup system so if that process failed, they died. There was no rescue, no thought of rescue. The stakes were so high.”

McCauley said the event was so dangerous that then-President Richard Nixon had prepared a eulogy for the three astronauts the day before they landed on the moon. Copies of the eulogy will be available at the Rotary presentation. McCauley said each astronaut only earned $8 an hour.

“For those who weren’t around then or don’t remember those days, it was the biggest show on planet Earth,” McCauley said. “The entire world stopped to watch this. It was absolutely amazing. Everybody, hospitals, factories – when Apollo 11 touched down on the moon, an umpire stopped a baseball game in Yankee Stadium and 60,000 people got on their feet and sang the national anthem in the middle of a baseball game. It was the largest media event in history, that day when they landed on the moon.”

McCauley will give the same presentation at Purdue University on the actual anniversary, July 20. He expects 25,000 people to attend.

Westfield resident Greg McCauley said being a child of the space race is what influenced his pursuit of a career in space.

“When the Russians sent the first man into space in 1962, I was 11 years old, so I was in middle school when all this happened, and that was the prime time to be impressed by all this,” he said.  “When Apollo 11 landed, I had just graduated from Kokomo High School in June and I had grown up with this and loved everything about it.

“I decided I wanted to be in engineering and science and I loved space, I loved astronomy. I got my first telescope when I was 9. I was always inspired by the night sky and the wonder of, ‘What’s out there?’”