You are at:Home»Current in Zionsville»Zionsville Community»Harder, Broadwater excel in Miss Indiana competition

Paige Harder was doubly blessed as she found herself in the final five in the Miss Indiana competition for the second consecutive year.

“I felt overwhelmed by God placing me here this week with these girls,” Harder said. “Just the opportunity to be there was such a blessing and such a privilege. I’m just grateful to God.” 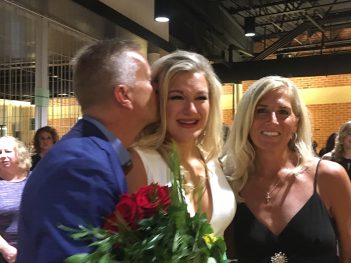 Harder, a 2015 Zionsville Community High School graduate, was the third runner-up in Miss Indiana competition June 15 at  the Zionsville Performing Arts Center. Tiarra Taylor of New Albany was crowned Miss Indiana and will advance to the Miss America competition. In the Miss Indiana’s Outstanding Teen competition, Olivia Broadwater, who will be a ZCHS senior in August, was the first runner-up.

Harder, whose parents now live in Carmel, was the Miss Indiana’s second runner-up in 2018.

For Harder, the relationships she made was the most special part of the week, which culminates with the finals.

“These girls are so intentional with one another, lifting each up, encouraging each other, praying with each other,” Harder said. “It’s been incredible to get to know girls from all walks of life and spend time with them.”

Harder, who plays the piano, won the Edward Poe Instrumental Scholarship. She earned $1,500 for placing fourth. A Taylor University graduate with a degree in exercise science, Harder plans to study to become a nurse practitioner. 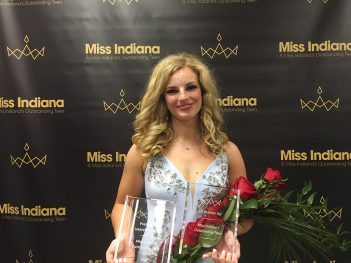 “We’ll see what God has in store,” Harder said of competing in Miss Indiana again.

Broadwater advanced to the competition by winning the Miss Fall Festival competition.

“It’s just my second pageant, and I’m just so grateful for the opportunity to have made it this far,” Broadwater said. “The amount of scholarships I racked up is just amazing.”

Broadwater, who earned a $1,000 scholarship for finishing second, won the interview award for her group and a preliminary talent award for her performance, singing “Never Enough.” She also sang the song at the final competition.

“I would love to compete for Miss Indiana someday,” Broadwater said. “I think I’m going to take off for a year or two, but I would love to do it when I get into college.”

Broadwater said she was happy for the winner, Hadley Abram of Bloomington, who she became close with during the week.

“We got very excited for each other and knew it was going to be all right,” Broadwater said when it got down to the two contestants.

Broadwater, who made the top 10 in the prestigious Songbook Academy finals in 2018, learned a lot from the week.

“It definitely taught me how to hold myself,” she said. “I always felt I could speak in public, but I learn so many tips and tricks to get my message across, to share my emotions and open myself up to everyone.”

Evelyn Harrison, who will be a Carmel High School senior in August, was one of the 11 semifinalists in the teen competition.

Samantha Robbins, a 2016 ZCHS graduate who was competing in her fourth Miss Indiana competition, captured the Hoosier Spirit Award, which includes a $500 scholarship.