Conner Scott was pulling double duty at Red Barn Summer Theatre for a couple of weeks.

Scott was performing in “The Amorous Ambassador,” which ended its run June 23, in the evening and rehearsing for “A Thousand Clowns” during the day. “A Thousand Clowns” was scheduled to begin June 26 and continues through July 7 at the Frankfort theater. 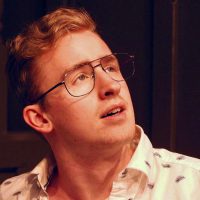 Scott, who is from Michigan, plays Murray Burns, a bachelor uncle who finds himself unemployed and enjoys the free time to do things he has never had time to do in New York. When social services come to check on his nephew’s upbringing, Burns must go back to work or lose custody.

“Doing back-to-back shows and trying to create two different characters at the same time has been a challenge,” said Michael Taylor, the play’s director and Red Barn’s artistic director. “He really worked hard and created a nice performance.”

Taylor, a Frankfort resident, is directing the six-person cast for the comedy-drama.

Eli Grasham, who will be an eighth-grader at Frankfort Middle School, plays Burns’ nephew.

“Eli has never worked in this space before, so we’re getting him to use his voice in a different way than he’s ever used before,” Taylor said. “He’s a very funny, comedic actor. This show is a little more challenging because of the fact he has to play someone more dramatic. The show has lots of humor but also stretches him as an actor, not just play the humor but also the heart of the show.”

Although the play was written by Herb Gardner in 1962 and then adapted into a 1965 movie starring Jason Robards Jr., Taylor said the play holds up well.

Taylor is pulling double duty himself as he also is directing the comedy “A Funny Thing Happened on the Way to the Forum,” which starts July 11 at the Red Barn.