Jacob Schilling’s role is taking him out of his comfort zone.

“I’ve always been the funny character or the one who has the most comic relief,” Schilling said. “I’ve never been someone who has such deep emotion and such a backstory to him.” 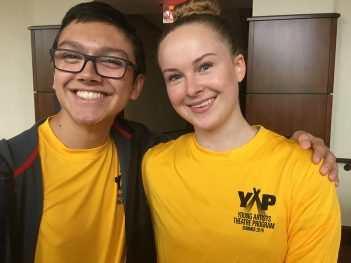 Schilling plays Paul San March in Civic Theatre Young Artists Program’s “A Chorus Line,” which runs July 25-28 at The Tarkington at the Center for the Performing Arts. The music for the musical about chorus dancers is by Marvin Hamlisch

“I hadn’t heard the show in-depth, so I had no idea what I was in store for,” Schilling said. “Some of the people in the cast I’ve known since I started. I got to grow up with them and some are among my closest friends.”

Schilling, who will be a senior at Fishers High School, performed in “Newsies” for Civic Theatre in the spring. This is Schilling’s third year with YAP. He also has done many Jr. Civic and mainstage Civic shows.

Isa Armstrong, who will be a senior at Hamilton Southeastern High School in August, plays Lois in the ensemble and the dance captain.

Armstrong didn’t know much about “A Chorus Line” when it was first announced as this summer’s show.

“I did my research and listened to the music and saw some of the versions on YouTube before auditions,” Armstrong said. “Being the dance captain has been a cool experience (and) getting to work with (YAP coordinator) Anne (Beck), who is amazing. Being in the show is really fun. It’s really cool music. The dancing is hard but cool.”

This is Armstrong’s second show with YAP, having previously performed in “Guys and Dolls” in 2018.

“This summer is full of talented young artists who support one another more than I have ever witnessed,” Beck, a Fishers resident, stated in a release. “They are learning a very challenging piece of theater that changed the way we look at theater. So, they are not only learning the technical functions of the show, but also the heart behind it and how it pertains to what they all love to do. “