You are at:Home»Current in Westfield»Westfield Cover Stories»Purchasing property: Grand Junction designer said mayor’s sons’ home needed to be bought to make way for plaza; mayor said he had no involvement

When Mayor Andy Cook’s sons Ben and Brian Cook purchased a home on South Union Street, it was in 2007 before Cook was mayor of the City of Westfield. Plans for developing a downtown began to take shape when a comprehensive plan was approved by the Westfield City Council in 2008, specifying the need for a downtown.

As a result, Westfield began acquiring property throughout the 6-acre area planned for Grand Junction Park and Plaza in 2009, and the 2017 purchase of Cook’s sons’ house raised concerns about his possible involvement with the deal. Cook, however, said he wasn’t involved in the decision to include the property in the park’s design or the purchase price. 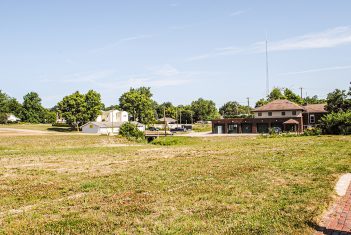 Four houses on South Union Street were purchased by the City of Westfield in 2017. They have since been torn down. (Photo by Anna Skinner)

The Cook house was one of four in a row along South Union Street just south of Jersey Street. Land Collective founding principal and Grand Junction Park and Plaza designer David Rubin told Cook the houses had to be razed to make way for the plaza. Brian Cook had lived in the house for approximately 1 ½ years until he and his wife moved because they required more space for their growing family. Since 2008, Brian Cook has rented out the property.

“David Rubin said, ‘In my design, those four houses need to come down and be a part of it,’ because he said, ‘You don’t want those homes blocking the view of this beautiful park on Union Street.’ I did not make that decision,” Cook said.

Cook said his sons didn’t have insider information because they purchased the home before the area was identified for the creation of a downtown, which was done in 2008. It was planned as a larger area than the plaza will encompass. The 6-acre area to become downtown was finalized in 2014.

“There’s no way Brian had inside information to buy that house because we didn’t even have a downtown plan,” Cook said. “We didn’t even know where the downtown was going to be when Brian bought that house. Grand Junction Task Group formed in 2008.” 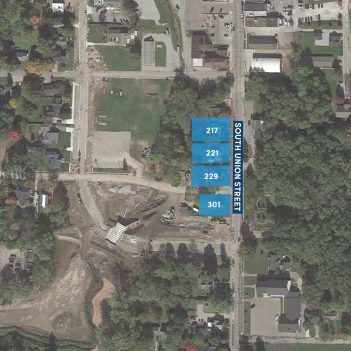 A map detailing where the four homes stood. The Cook house was at 217 S. Union St. (Submitted photo)

Shortly after GJTG formed, the city received its first artist’s rendering of the conceptualized downtown in 2008. A schematic design was created in 2011, and Land Collective was announced in 2014 as the firm to design the plaza.

Based on the original plan for a downtown, the city began purchasing property within the 6-acre areas of the plaza during a three-year period beginning in 2009. Cook said the city purchased more than 20 parcels during that time.

“We were still in the Recession. There were a lot of absentee owners, a lot of rentals and the owners were anxious to unload these properties because nothing was selling, so the land acquisition went really well,” Cook said. “We purchased like 20-some properties over a three-year period beginning in (2012). We did not purchase the four homes right on Union Street, one of which was Brian’s. We did not purchase those initially because we weren’t finished with the final design. When David Rubin did his final design, he is the one who said those four houses need to go.”

Rubin acknowledged he was the one who pressed the city to acquire the buildings, largely to stabilize Grassy Branch Creek.

“I pushed the director of public works and eventually the mayor toward the decision of buying those properties, not knowing who they belonged to, not knowing anything about them,” Rubin said. “Soon after we became involved in the project, it was very early on in our process because we began to realize we needed to stabilize the creek, and that drove the acquisition of those properties.”

To stabilize the creek, Rubin said the embankments had to be pushed back to create shelves where water can expand.

“On the eastern side is where the houses were, and in order to stabilize the creek, we had to push into those properties,” Rubin said.

Rubin also said when he encouraged the city to purchase the properties, Cook immediately told him one of the properties belonged to his sons.

“He was very upfront about it and made sure everybody knew about it. It doesn’t matter. We, as a design team, said ‘Who owns them? We need to stabilize this creek and we need that land,’” Rubin said.

“We hire a firm to assess the value of the property, and then that firm offers (the price) to the owners, not me,” Cook said. “A private firm offers what the city will buy it for.”

A rendering of the Grand Junction Park and Plaza. (Submitted photo)

For the four homes purchased in 2017 on South Union Street, city attorney Brian Zaiger said he didn’t have to file a lawsuit for any of them.

Grand Junction Park and Plaza is a 6-acre park with an outdoor performance pavilion, a trailhead and several other features. For more, visit westfield.in.gov.

Shortly after the Grand Junction Task Group was formed, a local newspaper filed a complaint in 2009 with the state requesting the GJTG comply with Open Door Law, requiring it to publish meeting times and locations prior to meetings. However, Public Access Counselor Andrew Kossack stated in a response to the newspaper’s inquiry that the GJTG was not created by statute, ordinance or executive order because no town official formerly participated in the activities, no funding was granted to GJTG and Cook did not appoint the members. As a result, it was not subject to the state’s Open Door Law.