You are at:Home»Current in Zionsville»Zionsville Community»Zionsville resident writes spy thriller

Not many people take up writing at age of 80. But that’s what Zionsville resident C. Bernard Huesing did after retiring.

“I’ve always wanted to write but I was involved in engineering and business for so many years,” Huesing said. “I told myself when I retired, I would get into it. I finally got a chance to do it. Now, I write every day, most of the time at the Zionsville library where it’s nice and quiet.” 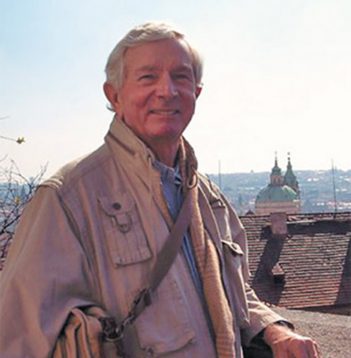 “The book is an international spy thriller,” Huesing said. “Abby White is a senior at Northwestern University in journalism and is an intern for the Chicago Tribune. Abby and her friends find themselves embroiled with the Mafia. They end up entering the world of spying.”

“I had a lot of research to do,” he said. “I had to make sure the dates I had the characters doing this concur with the actual dates in history.”

He is working on a sequel to thebook.

“It’s about Abby White’s sister,” Huesing said. “She’s about to have some adventure in her life, too. The working title is ‘Come Back, Janelle.’”

“She edits my work and she is very much a help,” he said.