“What I love the most about our upcoming show ‘Music Men’ is that you get a balance of classical and pop music,” Valdes said. “The first half of the show features two different pieces composed by Gershwin (‘Three Preludes’ and ‘An American in Paris’) and the second half features two pieces set to the music of Elton John (‘Eltoniana’) and Prince (‘Rain’). From Act 1 to Act 2, you see us move with elegance and charm to more of a fun, jazzy and sexy feel.” 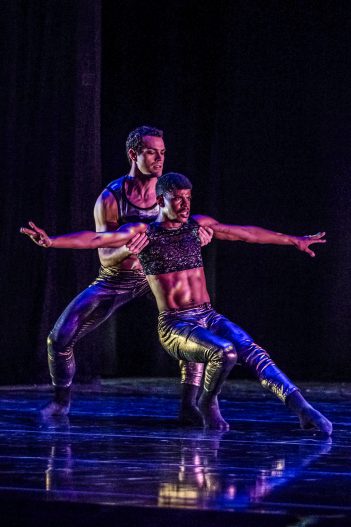 Valdes, an Indianapolis resident, is performing in Dance Kaleidoscope’s “Music Men” Aug. 3 and 4 at The Tarkington at the Center for the Performing Arts in Carmel.

“I am only the lead in ‘Rain,’ but I am lucky to perform in all four of the pieces in the show,” Valdes said. “In ‘Rain,’ I was lucky my first year to be given the opportunity to be the lead Prince figure in the show, which of course was a little stressful. But at DK, we are a family and I had the full support I needed to bring this piece to life thanks to everyone. It has been an honor to revisit such a meaningful work two years later and rediscover old and new experiences during this rehearsal process. I think as a dancer and person I have grown more into myself and can add new nuances that I didn’t before.”

Dance Kaleidoscope typically presents one performance each summer at The Tarkington.

“What I love about dancing at The Tarkington is, one, the stage is bigger, depth-wise, than our normal main stage at the IRT (Indiana Repertory Theatre),” Valdes said. “I also love having our show at The Tarkington because it gives us the opportunity to showcase our talent to new audience members who may not make it downtown to our normal season shows.”