A Zionsville company that provides mobile conveyors for infrastructure creation is expanding its business, aiming to double the number of trucks it has on the road by the end of the year. 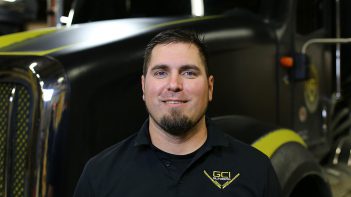 Gravel Conveyors Inc. formed in 2013 when CEO Travis Pettijohn acquired the company from his father, and with the ongoing expansion he wants to position the company for his children to run in the future.

The company, which has operated with up to 10 trucks, now has 18 operational trucks in its lineup and plans to add three more before the end of the year. In addition, the firm has added five positions since the expansion was announced. It will add at least seven positions by the end of the year and another 15 by the end of 2022. The company will expand its facility to add more bays to in-source painting its trucks

Director of Operations Aaron Witmer said the market has been the catalyst for the company’s expansion.

The company assists numerous infrastructure and housing developments throughout the central Indiana area. This is due in part because stone slingers, mobile conveyors powered by a hydraulic system that shoot materials, such as stone, in precise densities to exact locations from a road-side position, have become preferable for many projects as opposed to physical labor.

Witmer said the market’s shift toward stone slingers is likely because of cost effectiveness and time efficiency. Companies also must follow legal codes that limit contamination of construction site and stormwater systems, which, in turn, prohibit workers from moving materials from the road to the construction site and back.

“You cannot drive around the job sites anymore,” Witmer said. “What the stone slinger does is allows all this work to be done from the road with less contamination and it’s more efficient, so jobs that used to take three weeks now take one day.”

“We feel that we are the leaders in the conveying industry,” Pettijohn said.