“Buddy: The Buddy Holly Story” and Kyle Jurassic, the performer playing the title role, are making their debut at Beef & Boards. 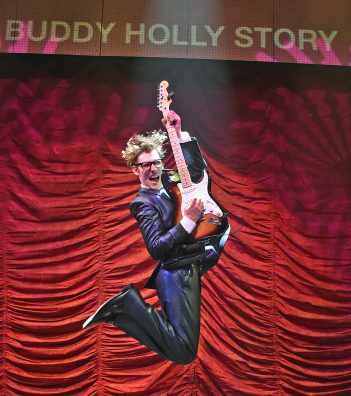 But Jurassic brings experience, having performed as Buddy Holly previously at The Dutch Apple Dinner Theatre in Lancaster, Pa., and at Harrah’s Resort in Atlantic City. And as he’s performed the iconic role, Jurassic has done his best to get to know the man behind those unmistakable spectacles.

“Buddy” runs through Aug. 18 at Beef & Boards in Indianapolis.

“Before I took on the role the first time, I didn’t really know that much about him,” Jurassic said. “I knew a couple of his songs. I knew that ‘American Pie’ by Don McLean was about him, and I knew the song (‘Buddy Holly’) by Weezer.”

So, Jurassic set out to learn more.

“He comes across so timid in his interviews, but as soon as he puts a guitar in his hand, he has so much energy and charisma,” Jurassic said. “I think I can relate to him a lot based on everything I’ve seen and read about him. He strikes me as an introverted extrovert. He is inherently shy but thrives when he is entertaining. He wants to be the life of the party, but it takes a minute for him to get out of his shell.

“There are moments where he comes across as the most confident person in the world, but I think it’s a fake-it-til-you-make-it attitude that he had. He knew when he wanted something that he had to exude the confidence needed to achieve or obtain that thing.”

Jurassic also is impressed with Holly’s spectacular rise to fame.

“I’m fascinated with how prolific he was in such a short amount of time,” Jurassic said. “His whole career really only spans about 18 months, but he wrote and recorded so many songs. It really is incredible.”

“Buddy: The Buddy Holly Story” is a show for both the most devout Buddy Holly fan and those who may be less familiar with the man, but more with his music, Jurassic said.