As a member of the third-place team in the AAU Nationals 10-and-under team, Maye McConnell and her teammates had a hunger for more. 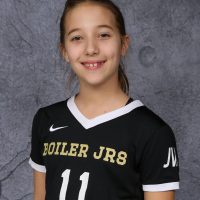 “Our goal this year was to come back and get first,” McConnell said. “The experience was great.”

The Academy Boiler Juniors Elite Gold Team became the first non-Puerto Rico team to win an 11U age group national title, beating Puerto Rico in straight sets June 20 in AAU Nationals in Orlando. The match was televised on ESPN3. Puerto Rico had beaten the Boiler Juniors earlier in the tournament.

McConnell, a Fishers resident who will be a sixth-grader at Hamilton Southeastern Intermediate Junior High in August, is one of three Hamilton County girls on the team. Joining her was Bailey Isley, Westfield, and Reese Resmer, Noblesville.

“We’ve been together for two years and we’ve had great, positive energy,” McConnell said. “We don’t let each other feel down. We always pick up our teammates. We have great coaches to help us on our way. We train hard and focus.” 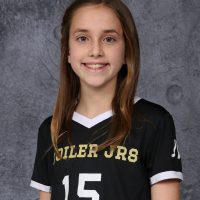 “My mom told me how good the coaches are and they will make me a great volleyball player,” McConnell said. “At first, I was sick of the car ride to Lafayette (for practices), but after a while it felt worth it because of the friendships and realizing what a great team we had and how much I love volleyball.”

Resmer, who will be a sixth-grader at Noblesville West Middle School, agreed the drives to Lafayette were worthwhile.

“Everybody knew their part was important and everybody did what they needed to do to make the team win,” Resmer said.

Isley, who will be a sixth-grader at Westfield Intermediate School, said the team has developed great chemistry. 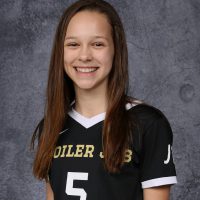 “We are able to work together to be an amazing team,” Isley said. “We’re all really close. Once we won nationals, we were so overwhelmed with joy.”