On Aug. 3, National Twins Day celebrated the bond between fraternal and identical twins. National Twin Day started in 1976 in the town of Twinsburg, Ohio, where the town conducted its first Twins Festival. 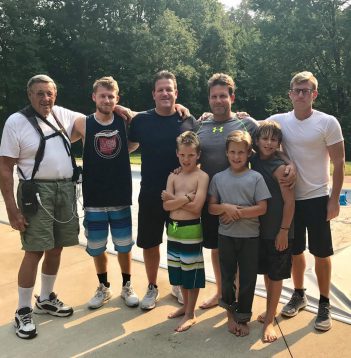 Hamilton County Commissioner Mark Heirbrandt, a Westfield resident, is a twin to his brother, Mike, who lives in Cicero.

“Growing up a twin was so fun,” Mark said. “You always had a best friend to play with. It’s been cool to see the closeness and unique nuances that come with being a twin.”

Mark said being a twin also has been as asset on the campaign trail.

“When I was running for re-election in 2016, Westfield and Fishers had a debate the same night,” he said. “So, I was panicking. I literally picked my phone up, called my brother and asked if there was any chance he could go there, tell people he was my brother and answer questions on my behalf. It really freaked everybody out because they couldn’t believe how much he was like me, even our mannerisms and voices.”

But the siblings’ similarities also can be confusing, especially in public.

There are many theories on the occurrences of multiples in families, from skipping generations to whether maternal or paternal genetics come into play during gestation. But Mark said his family defies all theories. The occurrence of twins and multiples is very common in his family.

Mark’s sons, Ethan and Evan, are twins, and Mike’s sons, Chase, Tim and Joel, are triplets.

Mark said he knows of two other instances of twins in his extended family.

“I talk to my twin brother three or four times a day. I don’t know how to explain it. It’s a bond that is so unique.”