A century ago, the American Legion Frank E. Huntzinger Post 45 in Noblesville became the first American Legion post chartered in Hamilton County. And as the post number implies, it was the 45th to be established in the state. 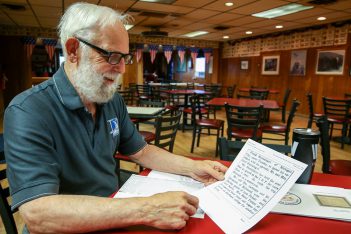 Finance Officer James Martin looks through old newspaper articles about Frank E. Huntzinger and the founding of the American Legion post in Noblesville.

When Post 45 was organized in March 1919, it was called the Hamilton County Post of World War Veterans. A short time later, it was re-christened an “American Legion” post after a national caucus in St. Louis in May 1919.

James Martin, the post’s finance officer, has dug deep into the history of the Legion in Noblesville.

“I have gone back to the beginning,” he said. “They have digitized most of the newspapers in the county now.”

The post is named in honor of the first person from Noblesville to have died in World War I. Frank Huntzinger was born in 1886. His family farm was just off Little Chicago Road. He served in the Army for seven years and later was a guard at the Indiana State Prison in Michigan City. In Sept. 1917, he rejoined the Army and was killed Sept. 29, 1918 in Belliccourt, France, at age 31.

“One article goes back to 1916,” Martin said. “It says, ‘Frank Huntzinger of Michigan City came Tuesday to visit with his parents. He has held a position as a guard at the Indiana State Prison for more than a year. He made the trip through on a motorcycle.’ Then there were other articles of his being killed in action, and you notice his name is spelled with an S instead of a Z. Why do you think that would be?” 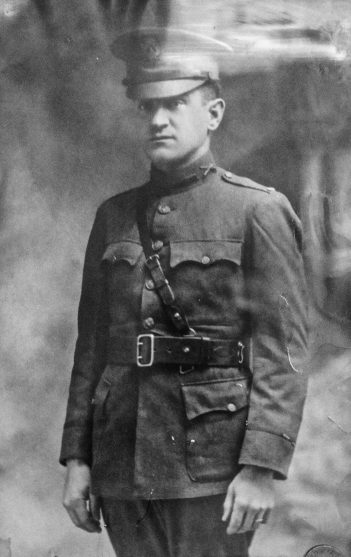 Frank E. Huntzinger was born in 1886. His family farm was just off Little Chicago Road in Noblesville. He served in the Army for seven years and later was a guard at the Indiana State Prison in Michigan City. In Sept. 1917, he rejoined the Army and was killed Sept. 29, 1918 in Belliccourt, France, at age 31.

Martin said he’s sure the decision was made by local newspapers and charter members of the post to replace the Z with an S to make the name sound less German. Although the Huntzinger family was of German heritage, they were Americans. Huntzinger was killed during the final year of the first World War.

Huntzinger’s father sold the family farm in 1921 and moved to town. Martin said the last he knew, the remaining member of the family, a neice of Huntzinger, lived in Florida.

Following the war, 52 charter members and a few others signed the official charter for Post 45 on Sept. 2, 1919. Because it was near the one-year anniversary of Huntzinger’s death, members thought it appropriate to honor him by naming the post after him. Still, his name appeared spelled with an S on the document.

The post’s first meeting was Sept. 22, 1919, at the Hamilton County Courthouse. Later, meetings were conducted at The Wild Opera House on South Ninth Street between Conner and Maple streets. Eventually, meetings at the opera house became too expensive, so they were again conducted at the courthouse.

Martin said there is no clear documentation for when the clubhouse at 1094 Conner St. was built or established as the American Legion. However, an expansion of the site was completed in the late 1950s or early 1960s.

Today, the post has approximately 425 members, including more than 100 auxiliary members and more than 100 Sons of the American Legion members.

“Our real goal here is to help veterans, and typically that means in Noblesville, but isn’t necessarily limited to Noblesville,” Martin said. “The idea is to help those that are in need, and you will find that some people need help filing paperwork, or they need help getting to the hospital or they just need food.” 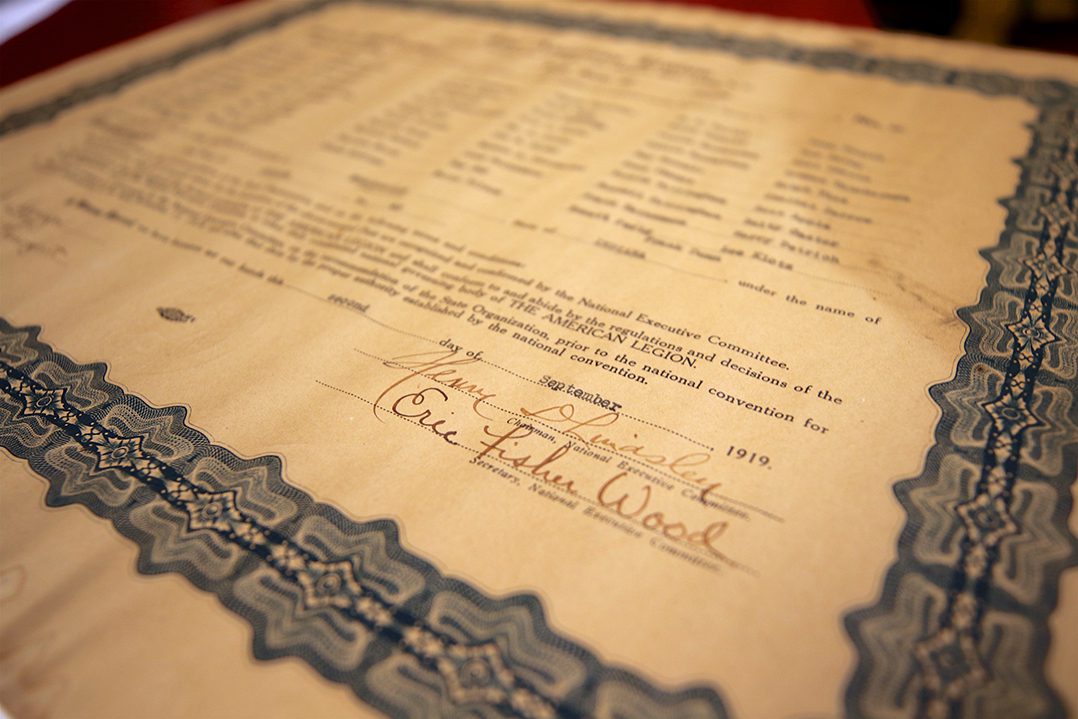 At 2 p.m. Aug. 17, American Legion Frank E. Huntzinger Post 45 will open its doors to the public for a community celebration commemorating its 100th year since being chartered in September 1919.

A short program commemorating the anniversary will be followed by an ice cream social, which also will include free hamburgers, hot dogs, pulled pork, cake and drinks. During the program, Post Commander Rickie Woods will welcome guests, followed by remarks from Finance Officer James Martin.

At 8 p.m. the same evening, live music will be played by Doug Robinson and The Rugged Brothers.

The public is invited to both events. Admission is free.