The Westfield Advisory Plan Commission began its Aug. 5 meeting at City Hall with a statement from Westfield Fire Marshal Garry Harling regarding the council chambers’ capacity — which, at the time, was overflowing.

The statement, read by Advisory Plan Commission President Randy Graham, said all attendees must be seated, that entrances and aisles not be blocked and that the nearly 100 people waiting outside could not enter the building unless others inside left.

The room holds 110, and nearly double that many people attended to voice their opinion on a proposed development – The Landings at Village Farms – at the northeastern corner of 146th Street and Oak Ridge Road.

The room holds 110, but nearly double that many people attended to voice their opinion on a proposed development – The Landings at Village Farms – at the northeastern corner of 146th Street and Oak Ridge Road.

Petitioners Pulte Homes and Mark Zukerman are requesting a change of zoning to allow for more dense housing and commercial buildings on a 58-acre space. The project, if approved, would fill the void in an area that consists several neighborhoods, including Village Farms, Hills and Dales West, Rolling Meadows, Beacon Point, Shadow Lakes, Hunters Creek Village and Westfield Farms, among others, in addition to Our Lady of Mount Carmel school.

If the petition is approved by the Westfield City Council, the land would change from single-family, low-density zoning to single-family, high-density and local business district zoning, something many residents don’t want, which they made clear during the meeting’s public hearing.

The 94 proposed homes would be built on 41 acres, along with two detention ponds and other amenities. The commercial portion would comprise 11 acres facing 146th Street on the southern portion of the 58-acre area. Just north of the commercial area is an approximately 6-acre utility easement. 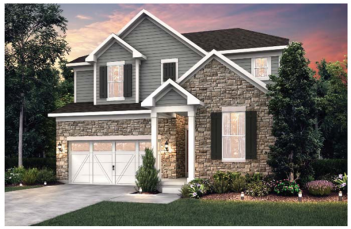 A character exhibit of the proposed two-story homes.

Dobosiewicz said the price point is lower than the homes in Village Farms. 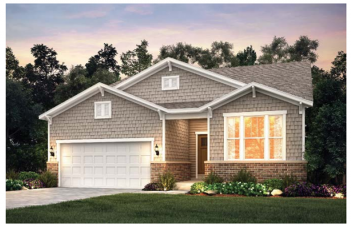 A character exhibit of the proposed ranch- style homes.

Regarding amenities, The Landings proposal includes several that Dobosiewicz said are in line with the city’s unified development ordinance and include a pocket park, a large park with open space, walking trails, a canoe/kayak launch and trail connectivity.

Before the start of the public hearing, a stack of comment cards with names of those wishing to voice opionions on the project numbered more than 50.

Erma Clark, a Village Farms resident, said she is concerned about pedestrian and traffic safety, but also wants to see the area remain undeveloped.

“I am right across the street from this development,” she said. “I have a daughter and son-in-law and two granddaughters who live in Village Farms. I am against any development in that area for several reasons – water displacement, increased traffic, increased crime, not to mention a utility easement that’s in an environmentally sensitive area. Not every square foot of farmland should be developed.”

Many residents who spoke said they understood the open land would someday be developed but that they have concerns about the need for commercial buildings in the neighborhood. 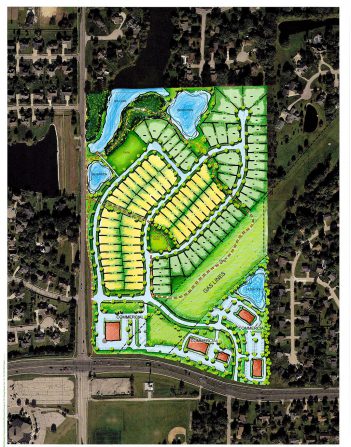 Doug Evans, a 20-year Village Farms resident, said he is against rezoning.

Resident Troy Yoder said he took it upon himself to look into commercial spaces already open in the area.

“I drove the route from over by LA Fitness to Clay Terrace up to Target over to Walmart, and there are 17 open commercial sites in less than a mile from this location,” Yoder said. “Online retailing is not decreasing as I’ve heard from every source on the planet, so I’m not sure why in the world we would do this. It makes zero sense.”

Matt Sprague, a Westfield Farms resident, whose home abuts the proposed development on the southeast side, also opposes rezoning.

“There’s one home that has this parking lot right behind the house. That’s my house. Do any of you want a parking lot in your backyard?” Sprague said. “I have five or six pharmacies within a mile of my house. Why do I need another pharmacy?”

Other residents said the density simply doesn’t match the homes surrounding the area. Taking into account space for amenities, detention ponds and open space, the plan would put two or three homes on each acre of residential development.

Because the item was presented for the public hearing, the APC did not vote to send a recommendation to the city council, which will give final approval on the rezoning request. The APC will vote on a recommendation at its next meeting at 7 p.m. Aug. 19 at City Hall, 130 Penn St. For more, or to see an agenda, visit westfield.in.gov.