Nolan Miles had some success when he started taekwondo, earning a spot on his Noblesville’s school demonstration team.

“But what I really wanted to do when I pictured taekwondo, I pictured fighting,” he said. “That’s what I was interested in. My parents helped me seek the coaches I needed. I would phase out other sports I would be doing and stay in taekwondo.” 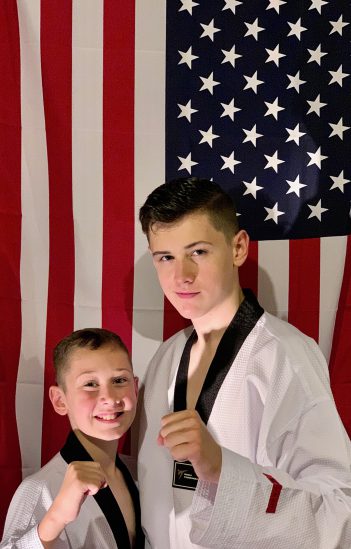 Nolan, 15, is ranked No. 2 nationally in male junior black belt, 63 kilograms (138 pounds) in the U.S. His younger brother Holden, 11, a sixth-grader at Hamilton Southeastern Intermediate School, has been ranked No. 1 all year in male youth black belt 40 kilograms (88 pounds).

Nolan, a sophomore at Fishers High School, has been competing in taekwondo for 11 years.  He has competed in sparring for three years.

“It’s full-contact fighting with interesting rules, which are more unique to the sport,” Nolan said.

Nolan started with a team in Houston, flying out for camps. He attended a two-week camp. Eventually, he switched to an Ohio team because of distance.

For the past year, Nolan has been going to the Washington, D.C., area a few weekends each month when he doesn’t have tournaments to train with the U.S. Tigers. His mother, Crystal, took him to the airport on Fridays this past school year. Despite the hectic schedule and advanced classes, Nolan maintained a 4.0 grade point average as a freshman.

“This team has become extremely helpful and has become a huge part of my life,” Nolan said. “My head coach (Dennis Kim) and master has been training Olympians and is very respected among all the coaches. His athletes are all junior boys, which is my age division. I’ve learned from them, been challenged and continued to grow.”

Holden has been invited to work with the U.S. Tigers and usually goes once a month.

The Miles brothers will compete in the Atlanta Open Aug. 17, the Phoenix Open Aug. 24, the Canada Open in Toronto Oct. 5 and the International President’s Cup in Las Vegas Oct. 12.

“Every tournament is based on skill level that shows up and size of tournament,” Nolan said. “You have to do your best at each one of them so you can accumulate your points. That’s why you have to go to many tournaments. Every tournament affects your journey.”

Nolan will attend The Grand Slam tournament for top six U.S. competitors in each division Nov. 1-4 in Colorado Springs, Colo.

Nolan is seeking to be No. 1 so he can be on the Junior World Team that will travel to Bulgaria in October 2020. His goal is make the U.S. Olympic team in 2024.

“USA Taekwondo reached out to us saying they were looking for people to represent us at the 2024 Games because he will be 20,” Crystal said. “For boys, that’s when they are mature. So, we were invited to train with (the U.S. Tigers) because it has Olympic coaches.”

Crystal said her sons have won gold medals in nine different states this year. Holden won gold at the AAU Nationals July 4 in his division in Ft. Lauderdale, Fla.

Holden said when he was younger, his parents took him to Nolan’s tournaments.

“Taekwondo is not only a super fun thing to do but when I see movies, I compare myself to ‘Rocky’ or a boxer,” Holden said. “I say I’m sort of like that, too. I go out and train and then I fight.”

The brothers have a training studio in their home’s basement.