You are at:Home»Current in Carmel»Carmel Community»State’s top high school football recruit doesn’t like to talk about it 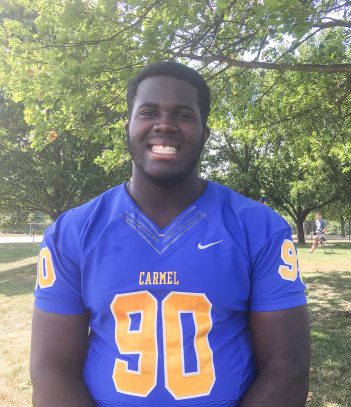 “Even with two guys blocking him, it’s a long shot you are going to keep him from getting to the ball,” Greyhounds football coach John Hebert said. “Even though he’s getting double- and triple-teamed, I expect him to make more plays because he’s learned a lot and he’s a lot stronger and bigger. He’s in the best shape he’s ever been in.”

Entering Carmel’s season opener Aug. 23 at Louisville Trinity, Brevard is listed as a four-star recruit and the top recruit in the class of 2020 in Indiana by 24/7 Sports, ESPN and rivals.com. Brevard committed to Penn State in the spring to concentrate on his season.

“I have a one-track mind. I don’t let that stuff go to my head,” Brevard said. “I don’t shout out I’m going to Penn State. I just want to make sure I’m the best I can be for the team I’m on right now so we can focus on our goals. I’m a humble guy. I don’t want to praise myself.”

The Greyhounds reached the 2018 Class 6A state championship game before losing to Warren Central.

“We’re definitely hungry to get back there, but it’s not at the front of our mind to get back there,” said Brevard, who transferred to CHS as a sophomore after spending his freshman year at Brebeuf Jesuit. “We’re just focusing on our first game at Trinity.”

“He’s one of a kind,” Hebert said. “He’s a very caring person, about other people and he cares about what we’re doing here. He has no ego.”

Brevard broke his hand against Center Grove in the third game of the 2018 and kept playing without alerting the staff.

Brevard described the time missed as “the worst four games of his life.”

Hebert said Brevard became like an assistant coach when he was sidelined.

“He hasn’t relinquished that, either,” Hebert said. “He’s headed for many more great things. We want to do something special with him here before he goes off in the world and impresses a larger audience.”