You are at:Home»Current in Carmel»Carmel Community»Inaugural Cruise Indy car show to benefit Folds of Honor

Kevin Macadaeg has been contemplating holding an event such as Cruise Indy car show for 20 years.

Macadaeg had watched as his hometown of Pontiac, Mich., held the Woodward Dream Cruise, which started in 1995. 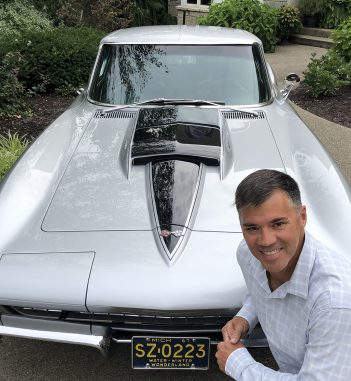 Kevin Macadaeg with his 1967 Corvette, which was owned by his father. (Submitted photo)

So Macadaeg, a doctor and founding member of Carmel-based Indiana Spine Group, finally launched Cruise Indy, which will be a 12-mile open cruise between Carmel and Indianapolis Sept. 14.

“With me being a motorhead wannabe and a supporter of the military, I was looking for a good venue for the military and I think this could be a good thing for Carmel, the state of Indiana and for Folds of Honor,” said Macadaeg, adding that Indiana Spine Group often supports charitable causes.

“If it becomes successful as a cruise, many things could be sponsored down the road,” Macadaeg said.

Macadaeg, 58, said he believes Indiana should have a huge cruise car show because the state has produced the coolest cars ever made – Duesenberg, Cord and Stutz – and has greatest racing venue in the world with the Indianapolis Motor Speedway. Indiana also is home to the first gas pumps and first electric hybrid and first fully electric automobiles.

The cruise travels from Smokey Row Road and heads down Range Line Road to 96th Street and turns around.

Macadeaeg, a Geist resident, said the interest from car clubs has been strong so far.

“I just want it to be a good weather day,” he said.

There will be an appearance by actress Catherine Bach from 10 a.m. to 2 p.m. Bach is best known for playing Daisy Duke in “The Dukes of Hazzard” TV series.