You are at:Home»Current in Fishers»Fishers Community»S.P.O.R.T.S to conduct second kickball event

Southeastern Program of Recreational Team Sports will conduct its second kickball tournament Kick for S.P.O.R.T.S at 9 a.m. Sept. 21 at Billericay Park, 12690 Promise Rd. Games will run every half hour with the championship game at 2 p.m. 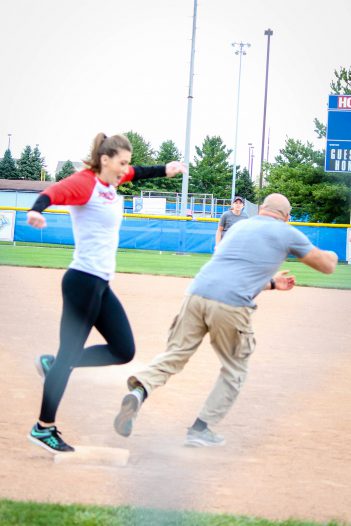 “With this being our second year, we’ve made some changes,” said Beth Lawrence, development coordinator for S.P.O.R.T.S. “By having it at Billericay Park, it allowed us to utilize more fields. We will have eight games being played at once.”

“We’re going with the philosophy of you never know who might end up on your bench,” Lawrence said. “We’re trying to keep the celebrity players a surprise. They’re just going to show up at the check-in table and jump onto teams throughout the day.”

Divisions will be determined after all teams have registered.

“This year we’re going to be able to show participants their schedule in advance,” Lawrence said. “We wanted to give participants more flexibility to join us on a busy Saturday, and the new format caters to this.”

The family friendly event also will have food and beverages for purchase.

“In our mind, it’s a community event,” Lawrence said. “If you’re not playing, we encourage residents to come out and cheer on the teams.”

“The money we raise during the tournament will provide youth sports scholarships for underprivileged families in Fishers and to provide background checks and key training for over 2,000 coaches involved in its leagues,” Lawrence said.

The registration fee is $200 per team. To register, visit kickforsports.org.