Drew Dixon, a 2019 Fishers High School graduate, recently competed in sport stacking for the seventh time at the Junior Olympics in North Carolina. 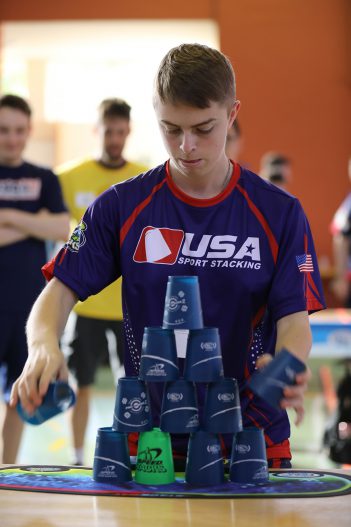 Sport stacking consists of 12 specially designed cups that are stacked and unstacked in certain sequences while being timed. There are relays and head-to-head competitions.

Dixon began experimenting with sport stacking when he was in elementary school. After years of practicing with normal cups, his grandparents bought him his first set of official stacking cups. He began competing at age 11.

Dixon took first place during his first competition in Connersville, which qualified him for the Junior Olympics.

“The concept of beating your time and seeing the physical progression of it (is exciting),” said Dixon, who plans to study mechanical engineering at Trine University. “Each time you do it, you’re getting better.”

After years of competing, Dixon became a part of Team USA in the summer of 2017. He competed in Worlds in April of 2018 in Orlando, Fla.

Dixon went to Spain earlier this year for the World Stacking Championships. He placed 43rd in the U.S. for males.

Dixon said he enjoys traveling and keeps him motivated for the sport.

Dixon will soon start a job with Speedstacks, the company that makes the specialized cups for competitions and sponsors Team USA. He will visit elementary schools and events and explain what the cups are and how to use them.

“You know you can’t get nervous (when competing) because you only get three chances,” Dixon said. “It has helped in school with speeches and presentations.”