For Sydne Horton, this was a dream moment. 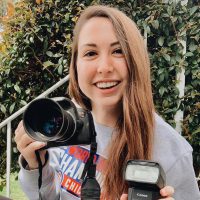 “Having my team’s film included in LA Shorts International Film Festival has been such a surreal and indescribable ride,’’ Horton said. “It’s been a dream for a long time coming to see a film I’ve not only directed on the big screen, but one I can share with so many friends as their first big screen credits as well. Sitting in a packed theater full of both crew members and strangers engaging with a story the writer, editor and I have been tirelessly working on for the past two years genuinely felt as close to magic as it can get.

“There is nothing like watching an audience experience your story and hear how it resonates with their own life. I’m still pinching myself to confirm that this isn’t all just a dream.”

Following the premiere, Horton said there was a question-and-answer session alongside many other talented artists.

“I quite honestly had to hold back how starstruck I was,” Horton said. “With the Q&A, it was both exhilarating to talk with the audience about the creation of this project and shocking to then realize I was the only female filmmaker on the panel.”

“Flicker” follows Leyla, a young woman weighed down by her father’s downspiraling health. Leyla desperately wants to escape her true reality and live in her social media facade where she can be in control.

“In a society so closely connected to social media outlets and technology, Leyla is driven by the idea of what it means to be an influencer and subconsciously feels that this could be the solution to her depression,” Horton said.

Horton said she had no idea what to expect from audiences.

“I had several people come up to me after the Q&A and say that the film was dark and twisted, but so relevant to the society we currently live in,” Horton said. “Several people even shared that they could relate to our lead character and often find themselves trying to escape into their social media personas. Others were really fixated on the visual effects our incredible editor and visual effects artist brought to life and utilized to really guide our story.

“With a project being told through text message, phone calls and social media pop-ups, it was really fun to experiment by telling this story in an untraditional way.”

After graduating from Columbia College in Chicago, Horton moved to Los Angeles, where she started as a production intern for Blumhouse Productions. She described it as a “genuine dream come true as a horror film fan.”

She worked at Blumhouse for nearly two years before moving from a production intern to office production assistant and eventually becoming a temporary executive assistant.