The Indianapolis Colts donated the K-9 and Westfield-based Custom Concrete covered the materials and labor to build the dog’s kennel. The dog, a 2-year-old German Shorthaired Pointer named Billy, is paired with officer Anuar Velazquez. Primarily, the partners will work at Westfield High School, but they also will provide a presence at the Indianapolis Colts’ training camp at Grand Park. Billy is trained in explosives detection.

The Indianapolis Colts, the City of Westfield and the Westfield Police Dept. announced the donation Aug. 5 on the Grand Park practice fields just before Colts camp began.

“This is going to be one of the best-educated dogs in the City of Westfield because he’s going to be spending a lot of time in our schools,” Mayor Andy Cook said. “In this day and age, there is a great need to continue our public safety. We are so grateful to our Custom Concrete and also to the Irsay family and the Indianapolis Colts for this very generous gift.

“Believe me, for a little city our size, this is a luxury, and we are very blessed to have Billy with us, so we really want to thank our two donors very much.”

Kalen Jackson, vice chair and co-owner of the Colts, said gifting the K-9 was something the Colts organization has always wanted to do.

“The opportunity to be able to help the school and community like this is just awesome,” he said.

Westfield Washington Schools Supt. Sherry Grate said school safety is multi-faceted, and WWS already has a close relationship with WPD.
“We are so grateful to be able to have Billy and have a K-9 of our very own,” she said. “The students just absolutely embrace and love Billy.”

WPD Chief Joel Rush expressed the department’s gratitude for the K-9..
“On behalf of the police department, I would really like to just thank the Colts and Custom Concrete for their donation,” he said. “Billy is at the school when he’s not here, and he makes our department better, he makes Anuar better, but it’s all about community, right? We come out here, and I think we all have a huge sense of community. The Colts organization has proven themselves to be just a bunch of great characters, great professional people and we love serving not only for the Colts and providing a safe environment for them, but also the community.” 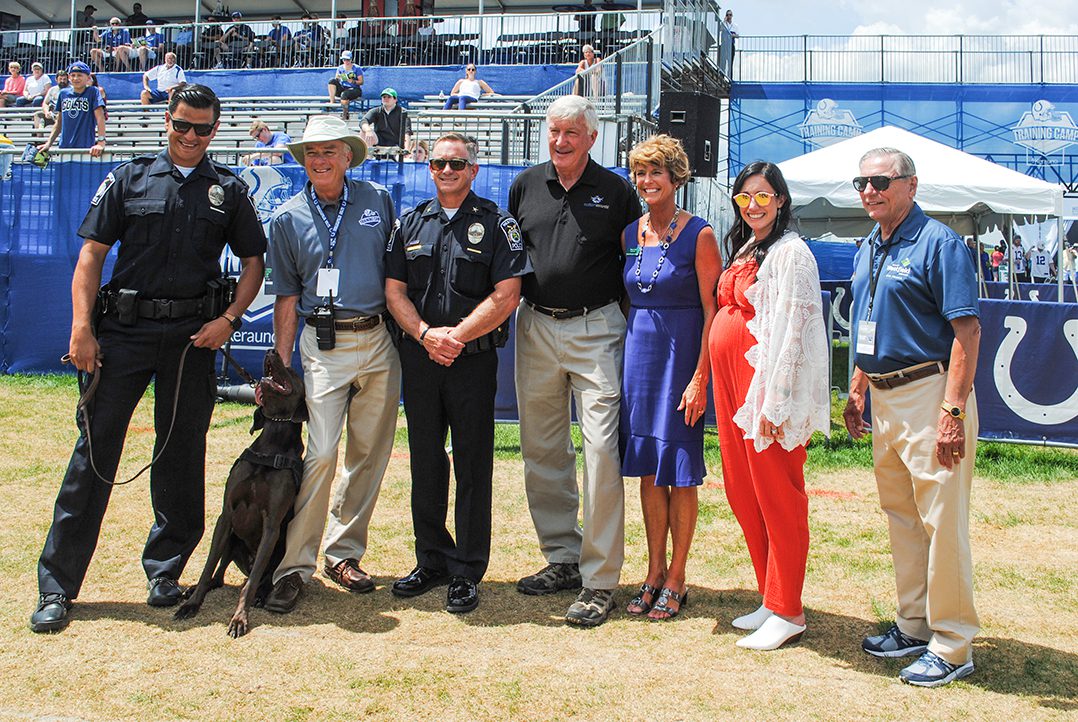 Not your average K9 officers

The Westfield Police Dept. has three K-9s, an explosives detection dog named Billy drug dogs Scout and Pilot. The dogs, however, don’t look like typical police K-9s. Billy and Scout are German Shorthaired Pointers and Pilot is a golden retriever.