Nishesh Basavareddy is a big fan of slower surfaces.

“Red clay suits my game well,” he said. “I like to work the point more and wear down my opponent. I like to finish off with spreading the court and hitting angles, then coming to the net.” 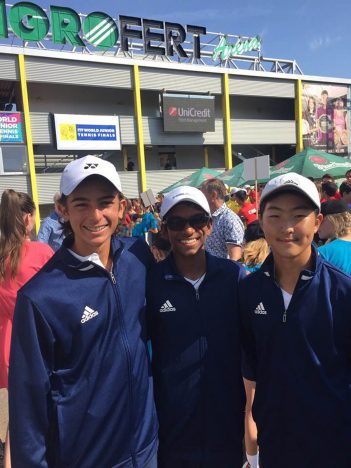 That served him well as the United States’ 14-and-under team played on red clay in the World Junior Tennis Finals Aug. 5-10 in Prostejov, Czech Republic.

The Carmel High School sophomore, one of three boys on the U.S. squad, was 11-0 in his singles and doubles matches in helping the U.S. win the team championship.

“It was a really good experience,” he said. “I got to see a lot of players from other countries, see what their game styles were and how I matched up against them. The level of play was really good because it was the 16 best countries in the world that came with the best juniors 14-and-under, so it really helped me see what I need to improve on to be with them.”

Basavareddy said he has started to hit the ball deeper this year.

“I’ve gotten more power on my shots,” he said. “I’ve worked really hard on my fitness and continue to improve my movement on the court because last year I got injured in June and had to get (knee) surgery. After recovering from that, I’ve done a lot better. I’m transitioning from defense to offense well.”

Basavareddy, who will turn 15 in May 2020, concentrates on junior tournaments rather than playing high school tennis.

“I have quite a few tournaments coming up later this fall,” he said.