You are at:Home»Current in Westfield»Westfield Cover Stories»At the dinner table: Moyer to head up second year of outdoor dining fundraiser

Dan Moyer wants to share a meal with the entire City of Westfield. Residents can join in by purchasing tickets for the second Dinner Party on Union fundraiser.

The Sept. 14 event features the longest outdoor dining table in Hamilton County and maybe even the state, although Moyer isn’t quite sure about the latter.

“Our goal is to make it bigger and better than last year and to get everyone in the community to support this event because it’s part of their community,” said Moyer, who owns Moyer Fine Jewelers in Westfield. “It’s a community-oriented event not for one specific charity. This is just for Westfield. It’s for downtown Westfield.” 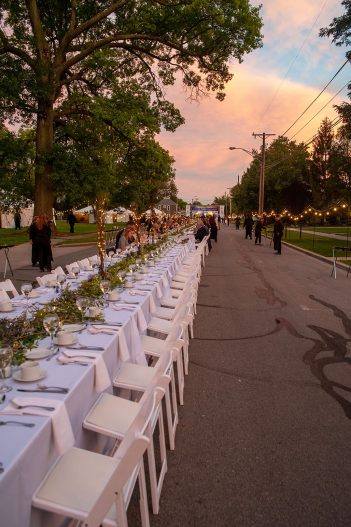 Originally, the goal was to raise money for an endowment for the Downtown Westfield Association to create a presence within Grand Junction Plaza when it’s complete.

However, after raising more than $70,000 last year, Moyer said some of funds from last year and this year’s event will be part of a $50,000 donation to the Westfield Playhouse, which is moving to downtown Westfield.

“We are going to try to help that come to fruition,” Moyer said. “It’s going to be a really cool building right there, right on Union Street, right where our silent auction tent was last year. We are not saying we are responsible for (the playhouse), we are just saying we are helping.”

Funds also can be used to purchase items for the Grand Junction Park and Plaza when its complete. Moyer said if a downtown charity requests funds, the endowment may help there, too.

“Otherwise, we would just be saving money for Grand Junction Plaza to come up with a monument, and what we could do for the playhouse is way more valuable,” Moyer said. “We want everybody who is involved in Westfield to get involved in this because it’s all about Westfield. Great new things are happening. There’s the new playhouse going in, the new plaza going in, there are exciting things happening in Westfield, and this event is to help celebrate that and raise some money so we can continue to do exciting things this year.” 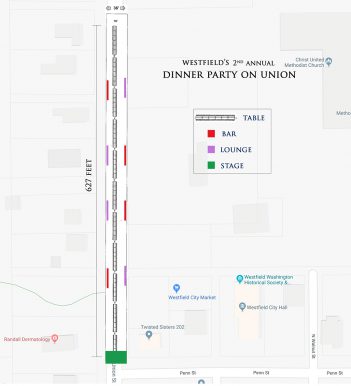 A map of the event. (Submitted photo)

The event will be from 6 to 11 p.m. Sept. 14. Dinner will be served on an exceptionally long table stretching down Union Street. Live music will be performed by the band Dude. The meal will be catered by Ritz Charles. The event also will include an open bar from 6 to 7 p.m., a silent and live auction, among other festivities.

“We are trying to create this to get everybody to be involved as the downtown evolves,” Moyer said. “There’s going to be a lot of evolvement over the next five to 10 years. We will hopefully make this the annual deal everybody in Westfield goes to for fun, mostly for fun, but also it’s going to help endow and enrich and enhance all things in Westfield we can do through the DWA.”

Tickets for a couple are $500, or $2,000 for a table of eight. Sponsorship opportunities are available. In case of inclement weather, the event will be moved inside to the Grand Park Event Center. For more, visit downtownwestfieldassociation.com.

Even organizer Dan Moyer declared last year’s inaugural Dinner Party on Union a success. Not surprisingly, he expects this year’s to be even better.

“Yeah, I would say (last year’s) was pretty good,” Moyer said. “Until that Saturday morning when I got there and saw tables getting run down the street, saw the stage pushed into place, saw the flowers up and Huston Electric put the lighting up, all of a sudden I said, ‘Wow, this is actually pretty cool, this is looking pretty neat.’ When (I heard) the weather was going to be good, it was really great.”

“The only thing everybody was kind of in agreement on that could be better was you couldn’t hear as well from the end of the table,” she said. “We will put out more speakers to get people up to the front so they know when the live auction is happening and the music.”