After playing to a soldout crowd last year, “The Battle of Mudsock” re-enactment will return this year with performances at 2 and 4:30 p.m. Sept. 8 at the Historic Ambassador House and Heritage Gardens, 10598 Eller Rd.

A second act has been added to the play. 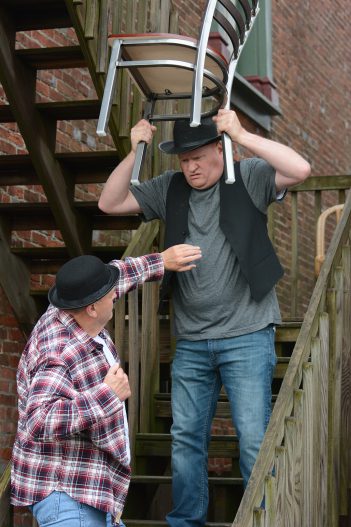 Fishers Police Dept. Lt. Dave Dunbar, left, and officer Chris Owens reenact the Battle of Mudsock. The reenactment will be at 2 and 4:30 p.m. Sept. 8. (Photos courtesy of Mark Langley)

The performance is a true re-enactment of the Nov. 19, 1881 Battle of Mudsock, in which patrons from two rival saloons in Fishers engaged in a brawl that injured 30 people and killed two.

Proceeds from the re-enactment will benefit the Ambassador House and the Fishers Police Foundation.
“Last year, we re-enacted the battle itself, the Battle of Mudsock, but historically there was a trial that occurred because a guy named (Benjamin) Fouch was killed by a guy named Hampton West,” said Ashton Wolf, who directed last year’s performance and also is directing this year’s. “We added the trial aspect of it.”

“What we realized was that the play was short and you’re reading the script and think it’ll take awhile, but obviously we are new to this,” said Fishers Police Dept. officer Robert Bowling, who wrote the play. “It seemed like we ran through it and it took us 35 minutes, and we even included some audience participation in the beginning, so that’s why we decided to do a second act to make it longer.”

“There was a standing ovation from the audience, so essentially, because of the wild success, we are back by popular demand,” Wolf said. “We hope to make it a yearly event if we continue to get the support we need.”

Advance tickets are $12 and are available at battleofmudsock.com. Tickets are $15 at the door. Children 4 to 12 are $5 and kids under 4 are free.

Concessions and beer will be available for purchase.

Unlike last year, local firefighters will not participate in the play.

“It’s hard on their schedule, and they couldn’t make a lot of the rehearsals, so we decided to just do two police teams,” Bowling said. “There are police officers on each team of the rival saloons and supplement that with some Scout parents.”

A female role has been introduced this year.

“There wasn’t a lot of roles for women back then, but one Scout mom said she would love to have a speaking part,” Bowling said.

Bowling learned that a woman owned the boarding house where Fouch eventually died, so he added that part to the play.

Hamilton County historian David Heighway is the narrator and portrays the judge. There will be a sing-along during performance, and Heighway will conduct a Q&A with the audience after the show.

For more or to purchase tickets, visit battleofmudsock.com. 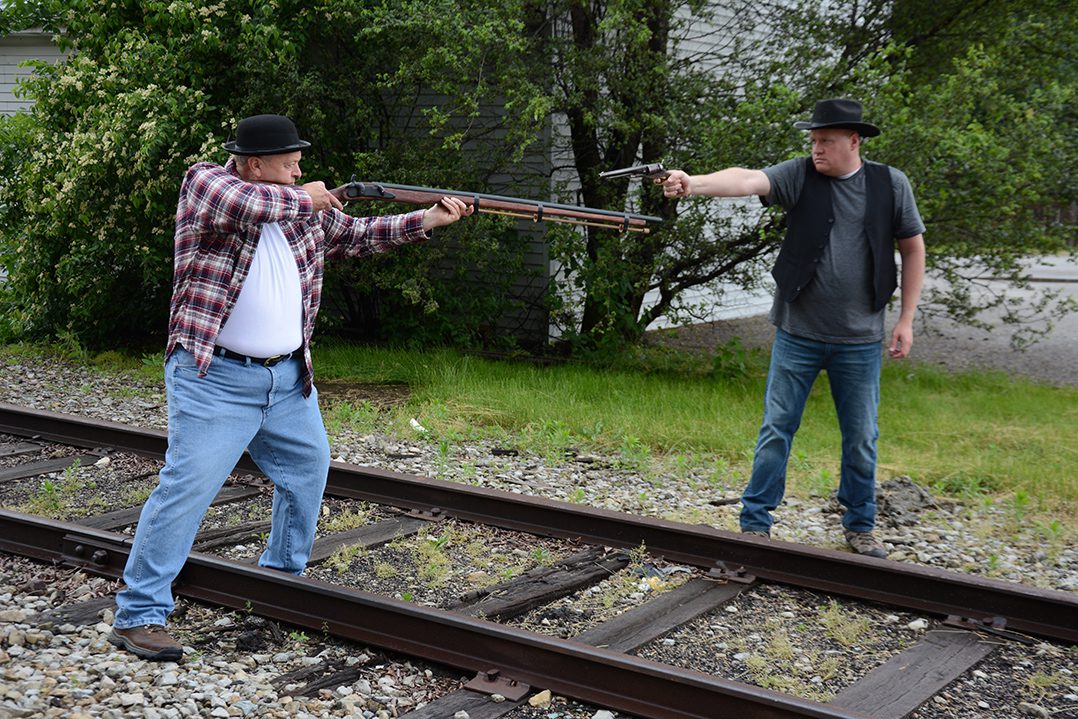 Fishers Police Dept. Lt. Dave Dunbar, left, and officer Chris Owens reenact the Battle of Mudsock. The reenactment will be at 2 and 4:30 p.m. Sept. 8. (Photos courtesy of Mark Langley)

In addition to area residents, a few special guests will be part of the audience.

“Hampton West is the guy who was charged with murder, and one of his descendants contacted us and saw the advertising,” Wolf said. “They’re going to attend the show.”

The descendants are traveling from South Carolina to see the performance.