You are at:Home»Current in Fishers»Fishers Cover Stories»Slow down: Local DPW foremen speak on rising dangers of the job

City of Fishers Dept. of Public Works foremen Dwayne Garrity and Doug Axsom know their jobs are dangerous. But lately, the risks have increased — to the point to the point where the City of Fishers has released a video as part of its Drive Fishers program, reminding drivers to watch for DPW employees as they navigate the city.

Some of the more dangerous jobs, Garrity said, is moving equipment onto a median to mow grass.

“With the influx of people in the area, a lot of people are distracted,” he said.

Garrity said each time crews are on the road, they run the risk of injury, or worse.

“We had a crack-seal crew on south Lantern last week and we had a vehicle in the work zone come within about a foot of them doing approximately 50 mph while we had multiple people in the road,” Axsom said. “I had three of them report it to me, and while they didn’t get the license plate, they described the vehicle because they wanted to see if the person could be held responsible.”

Garrity is aware some drivers don’t watch out for the DPW workers, so he said workers shave to be alert for their own safety.

“People are agitated and seem to be agitated while driving,” Axsom said. “They’re always watching us because we are in their way. Not from a safety standpoint, but because we are a problem to them.”

The most dangerous times of the day for crews are morning rush hour in the morning, lunch time and the end of shifts.

“There’s lots of tailgating,” Axsom said. “We tend to drive the speed limit or slower because we are trying to do our job, and that, unfortunately, irritates them.”

The public works team has been in meetings with the Fishers Police Dept. in an effort to have officers in work zones with the goal of slowing drivers down.

To date, no Fishers DPW worker has been seriously injured or killed, but there have been several close calls.
“We had a guy a few years ago get hit by a mirror working on the side of the road,” Garrity said. “We’ve been extremely lucky.” 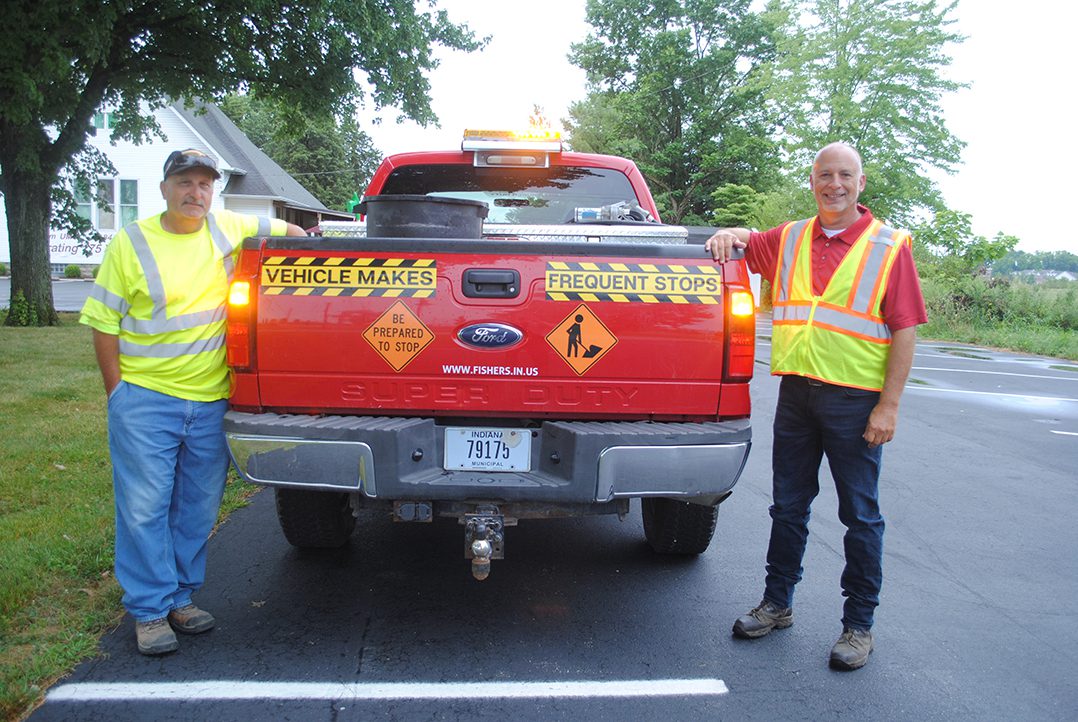 Dwayne Garrity, left, and Doug Axsom are part of the City of Fishers’ Dept. of Public Works team.

City of Fishers Dept. of Public Works foreman Dwayne Garrity’s main concern is one of his crew members getting hurt by a distracted driver, especially if one of those members is one of the high school-aged kids that work with him during the summer.

“I had 17 summer-help kids this summer. They’re college kids, high school kids, and that’s my main focus, making sure they don’t get careless,” Garrity said. “I have talks with them about when you pull up to a worksite and there are four guys in the truck, you always check behind you before you open that door.

DPW has a safety coordinator and conducts monthly safety meetings monthly for staff. When possible, DPW crews try not to begin work until 9 a.m. to not interfere with rush hour.