You are at:Home»Current in Noblesville»Noblesville Community»NHS great Davis remembered for kindness, leadership

Jill Almodovar was a freshman when she joined senior Krissi Davis on the Noblesville High School volleyball and basketball teams.

“Krissi took me under her wing,” said Almodovar, whose maiden name is Lyon. “She became a sister basically. She took me everywhere. She was that kind of friend. Krissi was one of those people that if you were in her tribe, you were in her tribe forever. That bond was the same, no matter how many weeks it was since you saw each other.” 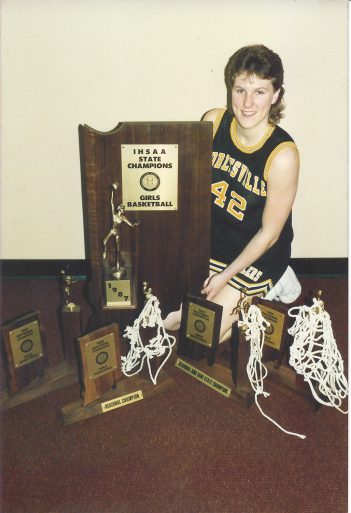 Davis, 51, died unexpectedly in her sleep Sept. 7. Almodovar said it was a shock to all.

“Krissi gave 100 percent to every single thing she did,” she said. “Krissi was a go-getter. Those of us who were part of her tribe will be blessed with her for the rest of our lives. For me, personally, she taught me how to be a winner, taught me how to be a teammate. Those are things you take with you the rest of your life. I’ve heard from so many teammates and coaches who coached her. We’re just heartbroken. A stud in all she ever did is gone.”

Davis, a 1987 NHS graduate, helped lead the Millers to an unbeaten state basketball championship as a senior. She was a two-time basketball team MVP at Notre Dame and was inducted into the Indiana Basketball Hall of Fame in 2017 individually and as a member of the 1987 undefeated, state-champion team.

Almodovar is in her third stint as a Millers volleyball coach. In her first stint, Davis was her assistant coach, and the team won back-to-back sectional titles in 2001-02.

“I begged her to coach with me all three times, but she only came that first time,” Almodovar said. “Krissi was into horse therapy and working with animals. She was big in the Humane Society (and) had other interests besides athletics.”

Davis, who was single and a part-owner of Davis-Haslam, Inc., an industrial supplies company, with her brother Mike, cherished her two dogs, Maggie and Roxy. She was named Elk Member of the Year in 2018 by Lodge No. 576.

Pete Smith, former Guerin Catholic and Noblesville basketball coach, has been friends with Davis for more than 25 years. 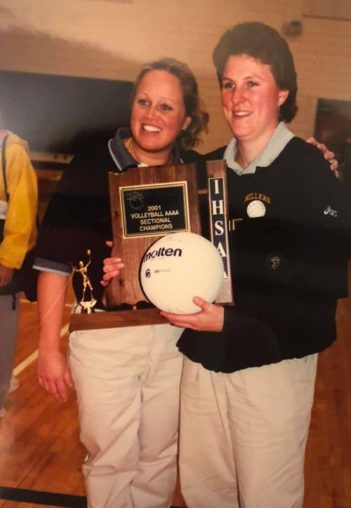 “She was so active in our Elks Lodge and in the community,” Smith said. “She was just an outstanding representative of Noblesville’s community. She came back to Noblesville after college. Her passion was there and she was a Miller.”

Smith, Exalted Ruler of the Elks, had met with Davis Sept. 5 to discuss an Elks charity golf fundraiser. Smith had asked her to chair the golf tournament, which benefits cancer, the previous year.

“She not only chaired it, but she knocked it out of the park,” Smith said. “It was the most money we ever raised for it.”

“She was an outside-the-box thinker,” he said.

Smith said Davis celebrated her birthday Sept. 4 with friends at the Elks. He said he first met her when he was the basketball coach at NHS from 1991 to 1994 and got to know her even better when he left to coach at Penn High School in Mishawaka and was living with then-Notre Dame men’s basketball assistant and now Iowa coach Fran McCaffery, who was then dating and later married Margaret Nowlin. Nowlin and Davis were former Notre Dame teammates.

“Krissi would come up and stay at our house to see Margaret,” Smith said.

Services will be held Sept. 13 at Our Lady of Grace Catholic Church in Noblesville. Visitation will be from noon to 3 p.m., and a Catholic mass will follow with entombment at Crownland Cemetery in Noblesville at 4:30 p.m. A celebration of life will take place at the Noblesville Elks Lodge at 6 p.m., and guests are encouraged to wear Notre Dame attire.

In lieu of flowers, contributions may be made to the Noblesville High School Scholarship program in Davis’ name. Checks should be mailed to First Merchants Bank, Logan Street – Noblesville, PO Box 792, Muncie IN 47308. Contributions also can be made to Best Friends Animal Society, 5001 Angel Canyon Rd., Kanab, Utah 84741, or at bestfriends.org.