His confidence got a boost when his film “We All Have It” was been selected into the Breckenridge (Colo.) Film Festival Sept. 19-21 and the All-American High School Film Festival in New York City. He plans to attend both festivals.

Ludwig, 17, wrote and directed the film that is just more than eight minutes long. 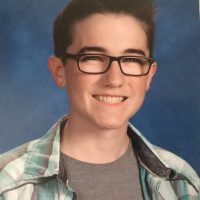 “This was a personal test (that) if I could get into national film festivals, it could be something I could do with my career,” he said. “To get accepted into two of the three festivals I applied was very encouraging. (The film) is about a sophomore who is getting prepared for his first homecoming (dance), but he has anxiety. The anxiety is represented by another person who is an actor in the film. It’s just how he interacts with his anxiety for the homecoming dance.

“In the end, you see him going to pick up his date and she has her own anxiety with her. That’s the whole message, that everyone gets nervous. It’s OK to talk to someone about it.”

The character talks to his own anxiety during the film.

The main character’s mom is played by Ludwig’s mother, Nicole.

“I just drew from everyone’s high school experience,” he said.

Ludwig’s first film was never submitted because he didn’t know copyrighted music material was not permitted.

Ludwig is writing a script on a college student who thinks his girlfriend is cheating on him, but he said there will be a plot twist. His goal is to complete it by March 2020 summer and fall film festival submission.

“I feel like this is going to be my best one yet,” he said.

Ludwig said he initially wanted to be an Air Force pilot but soon realized it was the story of the movie “Red Tails” that interested him more.