“My mom gave me lessons. Thank god that didn’t stick,” said Duncan, the son of a pastor. “My mom played the piano, too, and my dad played guitar. He taught me bass parts for church songs. That’s what I grew up in, church music mostly. I’ve got to admit, I used to listen to James Brown late at night. As a kid I had a lot of different instruments around the church. I had an empty church stage that I could use during the week and pretend I had an audience. 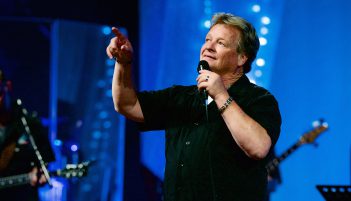 “The best thing I found from singing and writing my own songs was a therapy I found in singing through my troubles and finding ways to make sense of my purpose for being here.”

“You can expect an easy affability from me,” Duncan said. “I don’t take myself too seriously. I usually interject humor throughout the set. I also oftentimes speak of my faith from a personal level. As far as songs go, I try to pepper it with songs you would know from my olden days as well as songs that haven’t been recorded. I also try to cover songs you might not expect from me, doing a cover of a song my folks used to do when they were doing duets.

“For the most part, I’ll be doing songs from the new project called ‘Shine.’ One of my favorite new songs is ‘I Will Shine Through Every Shadow.’”

“Shine” was released in 2019. Duncan said he has two other songs he wants audiences to hear.

“I’ve been doing them almost every concert,” he said. “One of them is called ‘I Will Shine,’ and the other is called, ‘Remember My Mother.’ Both of them will likely have a significant impact on you.’”

The 66-year-old Riverside, Calif. resident has been in the business for more than 40 years, releasing his first album in 1977 as the lead singer of the Sweet Comfort Band. He released his first solo project, “Have Yourself Committed,” in 1985. Overall, he has released 27 records and sold more than 1 million albums. His industry awards include a Grammy and four Dove Awards, which are presented for Christian and gospel music.

“Well, I’ve recorded a lot of songs over my career,” he said. “There are favorites everyone wants to hear, songs like ‘I Love You With My Life’ and ‘Blessed Are The Tears,’ (and) sometimes ‘A Heart Like Mine.’ I’ll even take a request once in a while at concerts just to make sure we are touching base with people’s favorite songs. The ballads are pretty popular. I also like to do some favorite, up-tempo things because that is the mood I’m normally in. ‘Blue Skies’ and ‘Love Takes Time,’ I play that quite a bit.”

As a recovering addict, Duncan creates podcasts for those struggling with addiction issues at radiorehab.com. He said they are encouragement for people in recovery.

“It’s mostly music. I don’t do too many sermons,” he said.

Duncan has no plans to retire.

“I imagine I will continue to write and sing in the future as long as I breathe. At least, that’s my goal,” he said. “I hope my music will be a soundtrack for people like me to continue in farther, regardless of circumstances or mistakes and celebrating the best moments and joyful experiences along the way.”