Cameron Pritchard has completed his mission that started with his initial introduction to Boy Scouts 12 years ago.

“I have wanted to be an Eagle Scout since my very first Cub Scout meeting,” he said. “I was a Cub Scout from first grade until crossing over into Boy Scouts in fifth grade. I have been working towards Eagle ever since becoming a Boy Scout. I lived in Switzerland in sixth through eighth grade, and I was in a Boy Scouts of America Troop there that was part of the Transatlantic Council.” 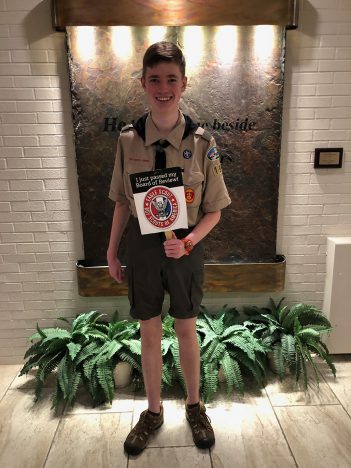 Cameron Pritchard holds a sign indicating he passed his board of review to complete his Eagle Scout requirements. (Submitted photo)

The University High School senior and Fishers resident turned to Stacey Summit-Mann, University’s director of campus and community, to get ideas for projects that would help the Carmel-based school.

“She gave me several ideas, and I picked building the picnic tables, so that full classes could be held in our outdoor classroom,” Pritchard said.

Pritchard built two octagonal picnic tables for the outdoor classroom. The additional seating allows more students to have a comfortable place to sit during classes.

With the help of eight volunteers made up of family, fellow Scouts and troop adults, Pritchard finished the Eagle Scout project Sept. 22, 2018. The school began using the tables immediately.

“I have since then finished up the final badges I needed, completed my Eagle handbook and had my board of review,” he said.

Pritchard’s Court of Honor was scheduled for Sept. 29 at Holy Family Episcopal Church in Fishers, which is the home of his Troop 199.

Pritchard grew up in Fishers and moved to Switzerland for three years because of his father’s job. The family then returned to Fishers.

Prior to the Eagle rank, Pritchard had demonstrated leadership as a senior patrol leader, patrol leader and quartermaster.