To her many friends, Courtney Cox Cole was always a catalyst.

“Courtney found a way to light up a room wherever she was,” said Jill Almodovar, a former Noblesville High School basketball teammate and longtime friend.

Cole, who never smoked, was a standout Noblesville High School girls basketball player and golfer and played both sports at Indiana University. She was more well known in recent years for her “Sisters of Savings” radio spots with her sister, Monica Peck.

The siblings purchased the business from their parents in 2008 and sold it nine years later in 2017 but continued doing radio spots – famously full of puns – for its new owners.

“Everything Courtney did she found humor in it, and she found fun in it,” said Almodovar, who said she was friends with Cox since seventh grade. “She always looked on the bright side. Never once did she falter that she was going to beat it. Never once did she give in and give up. Courtney was a winner until the very last day. I think, in a lot of people’s eyes, she won this battle because she fought it with grace and humor.”

Almodovar said Cole taught a lot of people lessons with the way she dealt with cancer.

A week before her death, Almodovar said she and Cole joked about beating old ladies at pickleball.

“I would give her assists like I used to in high school,” Almodovar said. “We were singing to ’80s music. She was doing everything she could to get out of her bed to get to me to hug me.”

Almodovar, whose maiden name is Lyon, transferred from Westfield schools to Noblesville in eighth grade. Cole was a year older and they began playing basketball together when Almodovar was a freshman.

The two played on the Millers’ unbeaten state championship team in 1987, a state runner-up team in 1988 and reached the state semifinals in 1989. Cole was inducted into the Indiana Basketball Hall of Fame in 2015. Krissi Davis, a star senior teammate on the 1987 NHS squad, died in her sleep Sept. 7.

“The Noblesville Athletic Dept. and community lost another pioneer (Sept 22),” NHD Athletic Director Leah Wooldridge said. “She was one of the most heralded student-athletes in Noblesville history. Courtney will be remembered as a fierce competitor, a successful businesswoman, a great mom and a great friend. She will be missed by all that had the privilege to know her.”

As a member of the Millers’ state girls golf championship teams in 1986 and ’87, Cole played two seasons for IU’s women’s basketball team before turning her full attention for golf. She made the NCAA tournament in golf in 1992 and ’93. 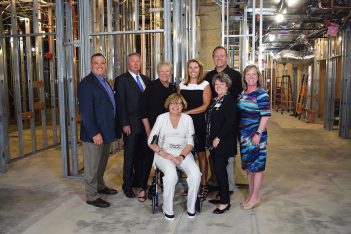 “I played against Courtney in both high school and college and remember her as a fierce competitor,” Moren said in a statement. “She took that same attitude as she battled cancer for the last six years. Courtney remained positive throughout her fight and became an inspiration to so many. History will remember her as one of Indiana’s all-time greatest, but more importantly, she will be remembered as a genuine, funny, successful businesswoman and as a loving mother, daughter and sister.”

The visitation is set for 4 to 8 p.m. Sept. 27 and noon to 12:45 p.m. Sept. 28 at Noblesville First United Methodist Church, 2051 Monument St., Noblesville. The funeral is at 1 p.m. A private, graveside service will follow, and a Celebration of Life event will be held from 4 to 7 p.m. at Harbour Trees Golf Club, 333 Regents Park Ln., Noblesville.  In lieu of flowers, memorial contributions may be made to the Riverview Health Foundation, Courtney Cox Cole Infusion Center, 395 Westfield Rd., Noblesville, IN 46060; or American Lung Association of Indiana, 115 W Washington St., Suite 1180-South, Indianapolis, IN 46204.