You are at:Home»Current in Carmel»Carmel Community»Zionsville resident compiles guide to navigating Zionsville committees

“I got involved in the vote against Sycamore Flats, and (Village resident) Marcia Angstadt was talking to me about other ways I might want to be involved with the town,” Cheraskin said. “I just sort of flippantly said to her, ‘I’m a good researcher if you ever need research for a project.’ I was serious, but what kind of research project would they ever need?” 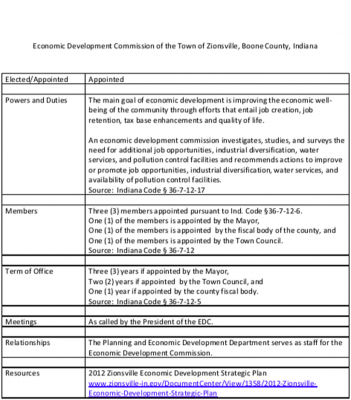 Lisa Cheraskin compiled a guide that gives descriptions and provides information about each of the town’s committees. (Submitted image)

When the Sycamore Flats development was proposed, many residents, including Cheraskin, wanted to attend meetings but often had trouble finding information.

“We were having trouble finding a lot of info about committees and boards and who might be interested in what they did and when they met,” Cheraskin said. “(Angstadt) asked me to pull all this information together and I thought, ‘This can’t be very hard,’ so I said, ‘Sure.’”

When Cheraskin got to work, she discovered the task would be tougher than she thought.

“When I looked into it, it was a very big deal because the town reorganized twice, in 2004 and 2014, and the results of those reorganizations were not incorporated into the town,” Cheraskin said. “So, information wasn’t easy to find.”

Cheraskin created a guide that includes information on each of the town’s committees, if members are appointed or elected, the committee’s purpose, how often it meets and any references or links. As she was compiling the guide, she discovered she couldn’t find all the information she needed.

“I couldn’t fill all those blanks in, so I just called Town Hall and talked to somebody and said, ‘Here’s what I’m trying to do,’” she said.

“They could not have been more receptive and open. They admitted info was hard to find because not everything had been integrated since the reorganization,” Cheraskin said. “Everything available was not easily accessible. They liked the work I had done, and they were willing to help me fill in the blanks and also wanted to publish (the guide) on the town website.”

Cheraskin said her goal was to create something for the Village Residents’ Association, but Willey suggested the guide could aid new committee members in their orientation. Cheraskin said the entire project took approximately 80 hours to complete and consisted of reading Indiana code, town ordinances and reorganization documents. Willey added a preface with the town’s history and a history of the reorganizations.
“That really creates good context for the tables,” Cheraskin said. “It was very much a collaborative effort.”

For more or to view the guide, visit zionsville-in.gov/DocumentCenter/View/2966/Town-of-Zionsville-Government-Elected-Officials-and-Commissions.