Authors often write about what they know. That’s what Fishers High School senior Anitha Sharma did when she she wrote her novel, “Stolen Friendship,” during her freshman year. The story focuses on the complexities of high school friendships. 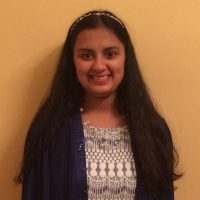 “We had a family gathering, and one of the kids started reading the book,” said Smitha Sharma, Anitha Sharma’s mother. “She finished the first chapter of the book, and she was so interested to know what would happen next.”

Anitha Sharma drew on her own high school experiences as subject matter for the book.

“I saw what my friends and other kids were going through in my school,” Anitha Sharma said.

Anitha Sharma began discussing the possibility of publishing the book with her mom.

“We thought, ‘Why not we take one step further to share it with others?’ It’s an experience that a lot of kids go through in the transition between middle school and high school,” Smitha Sharma said. “Everyone can relate to that, even when we grow older.”

The book was published by iUniverse and released in July.

“I feel very accomplished having it published,” Anitha Sharma said. “I’m hoping to have another one published in the next few years. I love to create suspense with my writing and keep readers on the hook.”

Anitha Sharma will have a book signing event from 10 a.m. to 1 p.m. Oct. 5 at Barnes & Noble in Noblesville, 17090 Mercantile Blvd. A portion of sales will go to Fishers High School.

The book is available for purchase on amazon.com., barnesandnoble.com. and goodreads.com, among other outlets.