You are at:Home»Current in Westfield»Westfield Community»Grate addresses Westfield Washington Schools’ plan for growth

WWS Supt. Sherry Grate addressed ways the district has planned for that growth at the Sept. 19 Westfield Chamber of Commerce luncheon at The Club at Chatham Hills in Westfield. The district is in the process of using $90 million to renovate and expand intermediate, middle school and high school projects. 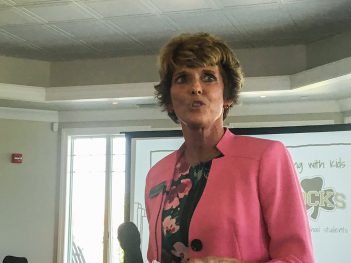 “Our middle and intermediate school projects will roughly be done at the end of 2019,” Grate said.

“The high school project is being done in phases and is much more complex, as you might imagine,” Grate said.

Grate said the high school project will likely continue through 2020.

The front parking lot was completely renovated during the summer. Additional spaces on the north end of the high school also were added.

“With the expansion and renovations and as we go through the different phases, that will continue to alleviate congestion in the halls,” Grate said. “What’s really awesome about the additions is when you walk right into the high school, there will be a grand staircase. That will be one opportunity to open up different pathways for students. When the other wing opens up, that will open up ways for students to get to and from classes.”

“We’ve been very thoughtful and deliberate about the future of our school district,” she said.

Housing data is sent monthly to the district’s demographer.

“After the 2020 census, we looked at anything that was an anomaly to make any adjustments in our plans,” Grate said. “But so far, he’s been spot on.”

The pool in the middle school has been closed to reallocate space.

“The high school pool will remain open until we are able to get our natatorium constructed,” Grate said. “We’re super excited about the public-private partnership with the YMCA of Greater Indianapolis.”

Grate shared a video of the plan, called “Growing the Rock Way.”

“We are one of the fastest-growing school districts in Indiana,” Grate said. “Development continues to explore, which means our student population is growing.”

Grate said the construction projects were necessary because the schools’ capacities were reaching their limits.

To address capacity concerns at the elementary school level, the plan is to build an early learning center for the TOTS program and development preschool program. It also could house the central office.

Grate said pulling the programs out of the elementary schools will free up nearly 21 classroom spaces across the district.

“It also could potentially eliminate the need for redistricting,” she said. “It would eliminate the monthly lease payments for central office.”

At the high school, the plan is for the addition large group instructional space.

“We also are going through discussions about alternative learning,” she said. “I don’t know if that will encompass new construction or use of another facility. We’ve built all this into the five-year plan of ‘Growing the Rock Way.’ We are using our demographics study to drive what those projects should be. It also depends on, ‘What does learning look like in five years, 10 years or 20 years?’”

The operating referendum will be set for 2023, when the seven-year referendum expires.

“When that would be renewed, it would be for eight years,” she said.