A few years ago, a close family member of Bart Waclawik was diagnosed with generalized anxiety disorder. He was prescribed antidepressants but didn’t respond well to them and started having significant side effects.

“I began researching non-drug approaches to treatment of this disorder and came across cranial electrotherapy stimulation that has been approved by the FDA for treatment of anxiety, depression and insomnia for many years,” said Waclawik, owner of Innovative Neurological Devices. “I found there were a number of clinical trials conducted over the years showing that the technology works, especially for treatment of anxiety and accompanying insomnia.” 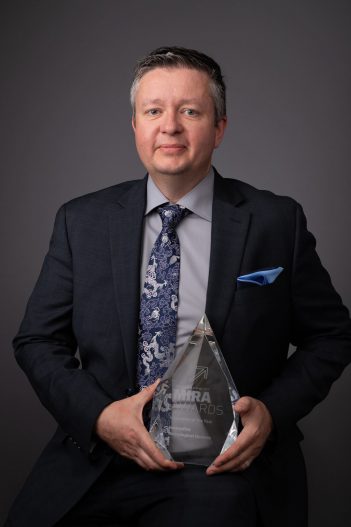 Waclawik bought a CES device and his family member started improving within a couple of weeks.

“However, he was complaining that the device I bought for him, which used ear-clip electrodes, was uncomfortable to use and he was reluctant to use the device in school, where his anxiety was at the highest,” Waclawik.

That led the Carmel entrepreneur to integrate the technology into headphones that resemble those used for music or to cancel noise.

“Everyone, especially adolescents and young adults, use headphones during work, study and play. To me, integrating a medical device into an accessory that is a part of people’s daily life seemed like a logical and a natural choice,” Waclawik said. “Also, people who suffer from anxiety often want to isolate themselves from their environment during an attack, so making the headphones noise cancelling also seemed appropriate. Lastly, based on patient feedback, I wanted to make a device that is ‘stealthy,’ so patients can use it without others knowing they are getting treatment.”

Waclawik markets the headphones under the name Cervella.

“Cervello means ‘brain’ in Italian, and cervella is just a plural form. Since we deliver electrical current to the brain, we felt it was an appropriate name,” he said. “It is also reasonably easy to pronounce and remember for English speakers.”

Cervella can be controlled by a smartphone app and is easy to use outside the house.

“The patient can put the headset on, put the device in his or her pocket and control the device completely from the app as there are no buttons or even an on/off switch on the device. It is all controlled through Bluetooth,” Waclawik said. “For the clinician, the important feature is that the app automatically records all of the treatment parameters and patient treatment history, which should allow the doctor to better monitor a patient’s progress and adjust the treatment plan.”

The device won a Mira Award for Innovation of the Year, leading to a lot of exposure for the company.

“More importantly, it brought to light that there are non-drug, FDA-cleared and clinically validated options for patients suffering from anxiety and depression, which are disorders that affect at least 18 percent of the adult population,” Waclawik said. “Everyone knows someone who suffers from anxiety and depression, so treatment of this disorder is something that is personal and relatable to almost everyone.”