“During the application process for directors, that was the one I really, really wanted to do,” Nagel said. “I’m super-excited to do the one I originally picked out.” 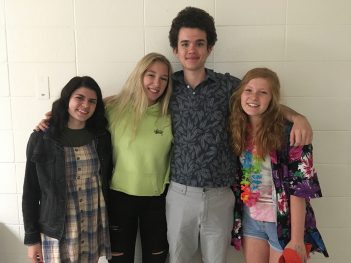 Nagel, who is directing “No More Mr. Nice Guy,” is one of four senior directors for The Studio One Acts Oct. 3 to 5. The performances are at 8 p.m. in the school’s Studio Theater.

Nagel, who loves comedies, said the characters are funny.

“It takes place in a nonsensical world,” said Nagel, who performed in the One Acts as a sophomore and junior.

This is Nagel’s first time directing. Her play is one of two written by Jonathan Rand. Kyle Fleckenstein is directing the other, “May the Best Fan Win.”

“My friend, Luke Vreeman, and I starred in it in eighth grade at Carmel Middle School, so it was kind of a throwback,” he said. “It’s fun to see the two parts of the show come together on stage. There are two sportscasters and there are two men on the couch doing their own fun thing.”

Vreeman is acting in “The Last Hat,” which is directed by Delaney Kibler.

“I found a script online and bought a book (of one-act plays) it was part of,” Kibler said. “The one I thought I wanted to do didn’t work out. But I flipped through the book and I fell in love with it and decided to do it.”

Kibler has been an assistant director on the composition show.

“I’ve always gravitated to directing from there on out,” said Kibler plans to pursue directing and stage managing as a career.

Piper Williams is directing “The Rental,” a two-person show. Williams has been performing since age 5.

“I’ve always wanted to explore the directing side, so this was the perfect opportunity to do that,” she said. “I think the characters are funny and relatable. That’s what made me pick it.”