That’s why the Lawrence resident has been the facilitator for the Titan Cadet squadron of the Civil Air Patrol at McKenzie Center for Innovation and Technology since 2014. The Titan Cadet Squadron started as an after-school club in 2006. 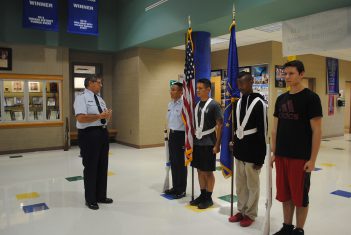 Civil Air Patrol is the official civilian volunteer auxiliary of the United States Air Force. The school squadron provides an opportunity for sophomores, juniors or seniors at Lawrence North or Lawrence Central high schools to register for the Civil Air Patrol class for a credit toward their Core 40 graduation requirement.

A cadet honor guard also is part of the program, and Merrill said it has presented the colors for several events.

“We present for the Geist Half Marathon, for Spark!Fishers, for the Lawrence Freedom Fest,” Merrill said. “We have posted for Monster Jam downtown. We have posted for the National Rifle Association convention. We participate in laying wreaths on graves of veterans at Crown Hill National Cemetery on the second Saturday in December every year.”

Some students eventually join the United States Air Force or other branches of the military. Others go on to to study aerospace engineering, while others take the class to learn discipline and dedication.

Within the Titan Cadet Squadron, students also participate in orientation flights at Indianapolis Metropolitan Airport in Fishers. Merrill earned his pilot’s license since 1974.

Students appreciate what they learn in the class.

“I decided to take this class because at first, I wanted to get some experience, some leadership experience, prior to joining the actual Army,” said Cadet Master Sgt. Kael Sherwood, a senior at Lawrence North who plans to attend college and enroll in ROTC. “I’ve been taking this ever since sophomore year. The best lessons I’ve learned? I’ve learned how to handle responsibility. I know how to be a leader now, and I also know how to do drill.”

“Ever since (my)  freshman year, I wanted to serve my country,” she said. “I’ve learned what it means to be a patriot. (Titan Cadet Squadron) will make you mature and it’ll make you grow up.” 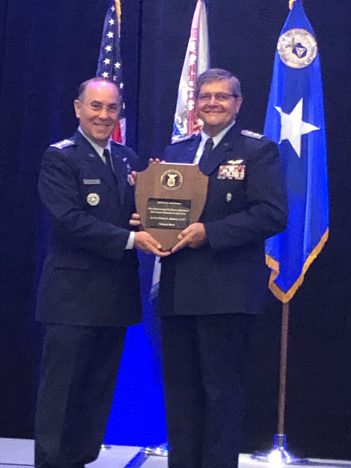 “Every year, every unit in Civil Air Patrol, there are 37 units across Indiana. Every unit may recommend or nominate a person to be recognized with the award. I was chosen by the Indiana Wing as the aerospace education officer for 2018,” Merrill said. “Receiving the Indiana Wing award allowed me to compete with other recipients of other awards in the surrounding states in the Great Lakes Region. I was selected as Great Lakes Region recipient of the same award, and then receiving the regional award allowed me to be selected as (aerospace education officer at the national level) out of eight regions across the country.”